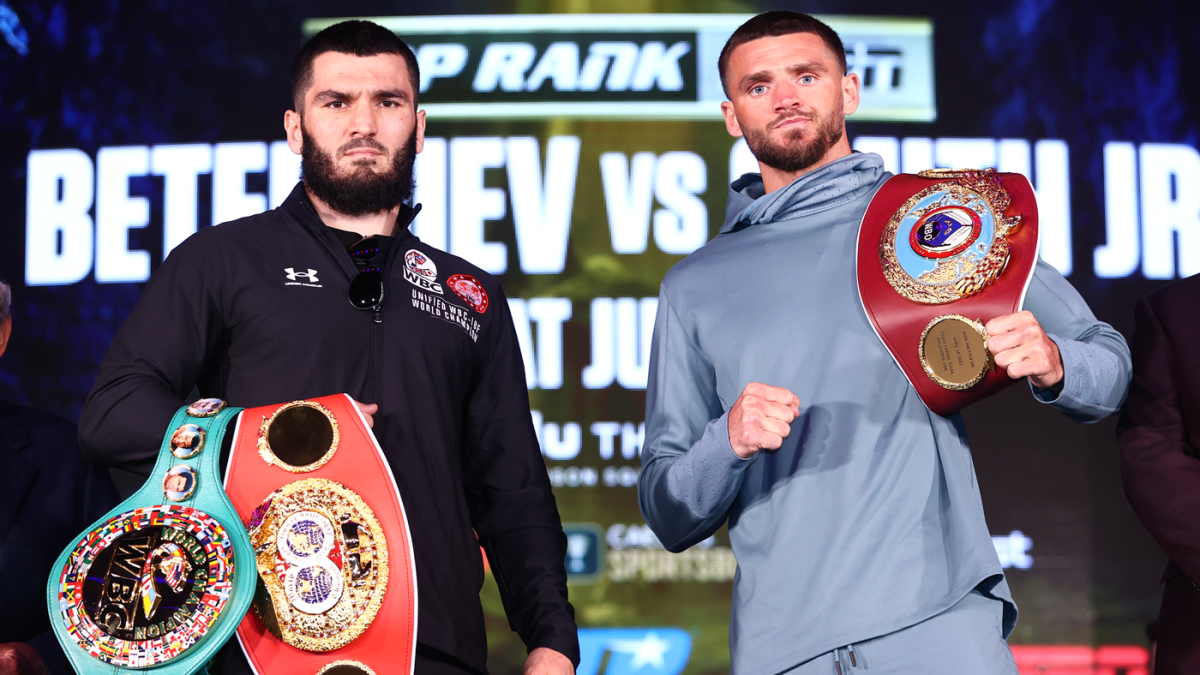 Boxing’s run of big clashes and multi-belt unifications continues on Saturday with what promises to be an all-action clash between WBC and IBF light heavyweight champion Artur Beterbiev and WBO champion Joe Smith Jr. The bout goes down from Madison Square Garden’s Hulu Theater on Saturday night (10 p.m. ET, ESPN).

Beterbiev (17-0, 17 KO) is one of the most feared punchers in the sport, having knocked out every man he has stepped into the ring with as a professional. He won the vacant IBF title in November 2017 with a knockout win of Enrico Kolling. Kolling nearly became the first man to take Beterbiev to the scorecards, but the relentless pressure of Beterbiev eventually caught up as he scored the knockout with just 27 seconds left in the fight.

Three fights later, Beterbiev added the WBC belt to his collection with a stoppage of Oleksandr Gvozdyk in a highly-anticipated fight that saw Beterbiev methodically break down an elite light heavyweight. He has twice defended his unified titles since the stoppage win over Gvozdyk.

“This is a very important fight for me. With regard to the place, it’s not different for me. I’m more focused on the fight. I’m more focused on my opponent, not on the place. I always ask my boxing coach and my conditioning coach about how I’m doing. I ask them if it’s less than I was doing two years ago. They tell me that I’m doing better than two years ago,” Beterbiev said at the final press conference.

“If we compare it to the last one, this camp went very well. This camp was better. I want to thank my team, my conditioning coach, my boxing coach, all my team and all my sparring partners who helped me. We had a good camp.”

In Smith (28-3, 22 KO), Beterbiev faces a fellow hard-hitting brawler who tries to use his power and grit to eventually catch his opponent and finish the fight.

It’s been a long run to a world championship for Smith, who beat Maxim Vlasov by majority decision in April 2021 to win the WBO title. That was Smith’s 30th professional bout. Prior to that, Smith had received a shot at WBA champion Dmitry Bivol in March 2019. Bivol dominated Smith in the fight, taking a wide decision that saw Smith only win two rounds at most.

Can’t get enough boxing and MMA? Get the latest in the world of combat sports from two of the best in the business. Subscribe to Morning Kombat with Luke Thomas and Brian Campbell for the best analysis and in-depth news.

“I believe this guy is in his prime right now. I don’t think age has anything to do with it. I know he’s here at 100 percent and ready to go. I know I’m here fighting one of the best, so I trained at 110%,” Smith said. “I made this camp a little longer. I made sure that I improved things that I wasn’t doing at my best. I stayed more consistent with my training, so I feel comfortable about this weekend.”

Bivol’s presence in the division looms large ahead of Beterbiev vs. Smith. After Bivol scored a big upset over Saul “Canelo” Alvarez, he has the most name value — and possibly the most skill — in the division. The winner of Saturday’s fight could be set up for a four-belt unification with Bivol to crown an undisputed champion at light heavyweight.

The co-feature bout on Saturday brings the return of a highly regarded prospect in Robeisy Ramirez. The Cuban native gets a tough test in veteran Abraham Nova. Ramirez is 9-1 since making his pro debut in 2019 in a losing effort. Since then, he’s beaten every man put in front of him with relative ease.

“My level increases with the quality of opponent that I have in front of me. So, I think my growth is due to me increasing the level of my opposition and because we’ve been increasing our work, both mentally and physically,” Ramirez said at the final press conference.

“We decided to take this fight because it would lead to a title shot. We all know who Abraham is. We all know the kind of record he has. So, a victory would put us one step away from fighting for a title. This was the step we wanted to take and the fight we were looking for. We weren’t looking to make a fight that wasn’t this one.”

Smith can punch and punch hard. Given he’s a talented fighter with serious power, he’s a very live underdog at +500. That said, Beterbiev is a fantastic fighter and a level above Smith. Smith needs to find some way to keep Beterbiev off of him and have space to let his rangy power punches go. That’s a big ask, however, as Beterbiev is outstanding at closing distance, getting inside and mauling with work to both the body and head.

That approach to fights is how Beterbiev has been so successful. He forces opponents to fight on the inside, where he has the edge, and he breaks them down until they simply don’t have anything left. Smith is tough enough to survive for a while but not for a full 12 rounds. Pick: Artur Beterbiev via TKO9