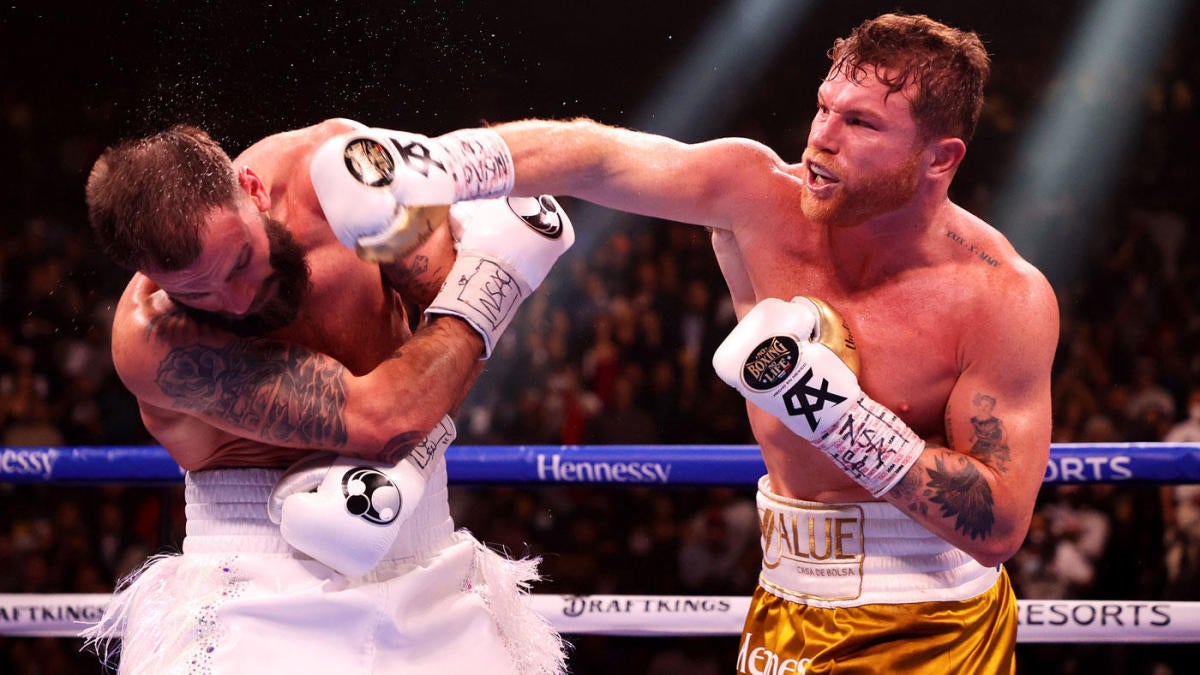 LAS VEGAS — Caleb Plant proved his doubters wrong with his toughness. Canelo Alvarez, meanwhile, showed once more why he’s the best pound-for-pound fighter in the game.

Alvarez (57-1-2, 39 KOs) scored a pair of knockdowns in Round 11 to stop Plant (21-1, 12 KOs) via TKO and make history inside the MGM Grand Garden Arena. The 31-year-old superstar became the first boxer to unify all four recognized titles at 168 pounds and the first Mexican fighter to become an undisputed champion.

The pro-Canelo crowd gave Alvarez a standing ovation following the finish as referee Russell Mora waived off the fight following the second knockdown without a count even though Plant looked to still be conscious. Alvarez put on a gold crown for his post-fight interview while draped in a veritable jacket of championship belts.

Can’t get enough boxing and MMA? Get the latest in the world of combat sports from two of the best in the business. Subscribe to Morning Kombat with Luke Thomas and Brian Campbell for the best analysis and in-depth news, including instant analysis of Canelo Alvarez vs. Caleb Plant live from Las Vegas below.

“It hasn’t been easy to get to this point. With your support, my family and my team, we got very far. This is for everybody, especially for Mexico.

“I have respect for Caleb Plant. He is a very difficult fighter and has a lot of ability. I definitely respect him.”

Plant showed his quick hands and responsible defense throughout to extend Alvarez into the championship rounds. But he was never able to consistently land anything of power beyond counter jabs due to Alvarez’s own exceptional guard.

Alvarez adjusted to Plant’s speed as early as the opening round by routinely cornering him and pounding away to the body. Although Plant made some adjustments entering the second half of the fight just as Alvarez slowed down a bit, he was unable to land anything of significance to dissuade Alvarez from coming forward.

“He was making my stuff a little difficult but [trainer] Eddy [Reynoso] told me to stick to the game plan and we got him,” Alvarez said.

The finish in Round 11 was set up beautifully by a lead left hook from Alvarez that pinned Plant to the ropes before a pair of uppercuts from Alvarez floored him. Plant reached his feet without much issue, but a subsequent flurry from Alvarez against the ropes produced a second knockdown and Mora’s immediate call for the end at 1:05 of Round 11.

“That’s the way it had to finish. I went for the kill.”

Alvarez outlanded Plant by a margin of 117 to 101, according to ShoStats. He held an advantage in body shots by a 53-13 margin and also connected on 41 percent of his power shots.

The two fighters embraced after the finish to put behind them a pre-fight build of bad blood which started at a Sept. 22 press conference in which the two fighters traded punches.

“We are men at the end [of the day],” Alvarez said. “He wanted to still fight and compete but, of course, there is no shame. He told me he’s sorry about the motherf—er incident and he didn’t mean it like that. I told him everything is OK and to keep going.”

Plant, 29, left the ring on his own power after the fight without doing an interview. He suffered the first defeat of his career to end an IBF title reign that began by defeating Jose Uzcategui in 2019.

Asked whether he would move back up to 175 pounds after unifying the super middleweight crown, the four-division champion Alvarez was unsure about his future.

Elsewhere on the card, Anthony Dirrell raised his hand as a potential challenger if Alvarez decides to stick around at 168 pounds. The former WBC super middleweight champion delivered a thunderous uppercut knockout against Marcos Hernandez in the fifth round. Dirrell, 37, had not had his hand raised in a fight since 2018 after losing to David Benavidez by knockout in 2019 and earning a draw with Kyrone Davis earlier this year.

Plus, rising prospect Elvis Rodriguez rebounded nicely from his first pro defeat with a fifth-round TKO of Juan Pablo Romero in the night’s opener. Rodriguez (12-1-1, 11 KOs) had been on a tear to start his career before a majority decision loss to Kenneth Sims Jr. derailed much of the hype around the 25-year-old. But a TKO over the likes of Romero will go a long way to soothing that wound as he continues his journey at super lightweight.