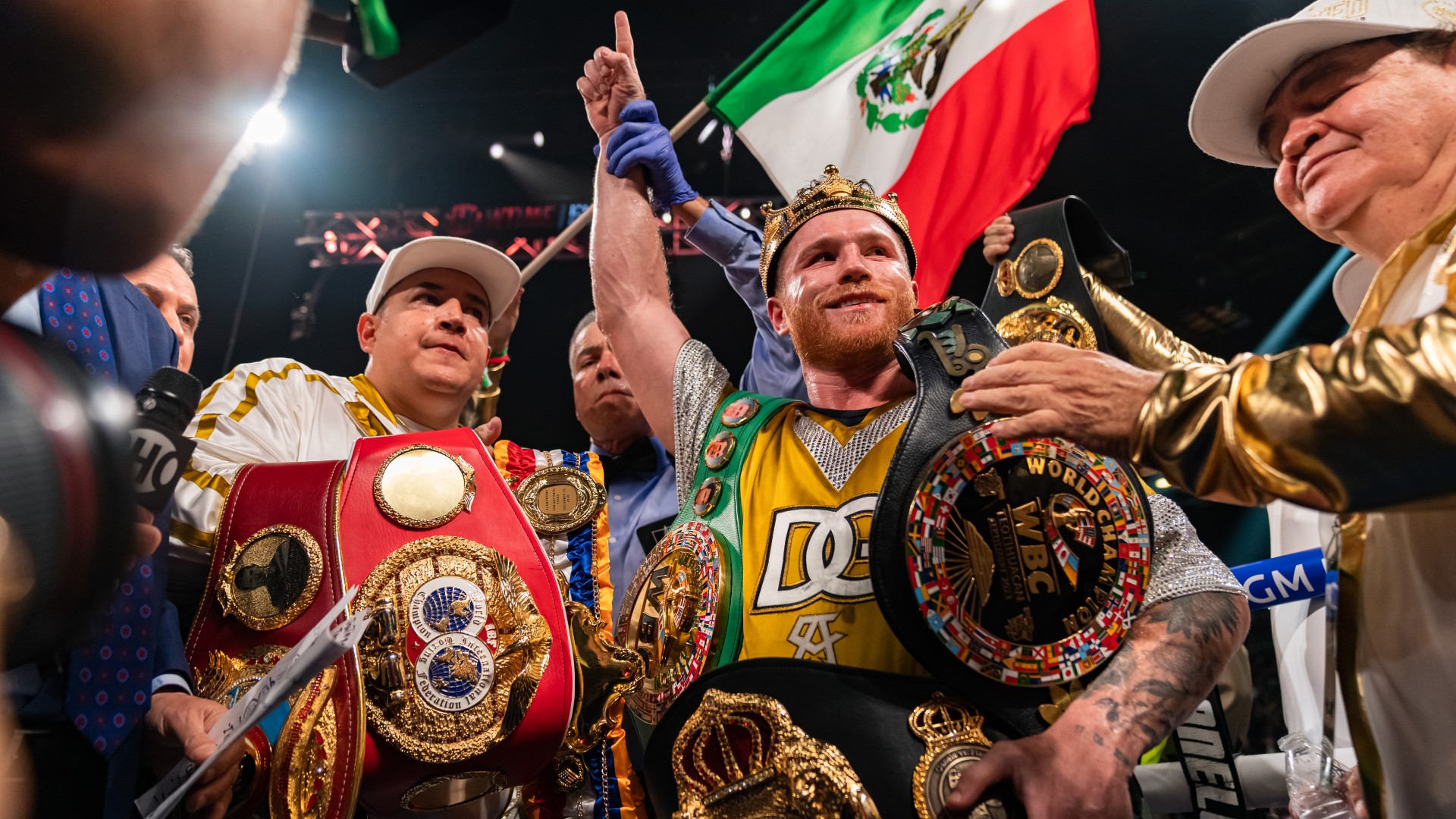 LAS VEGAS — There can only be one king. And it only took Canelo Alvarez 11 months to accomplish the feat. He is the first undisputed super middleweight champion after a brutal 11th-round TKO of Caleb Plant on Saturday night.

The best pound-for-pound fighter in the world made it clear that he would only be satisfied with a stoppage after the two fighters had bad blood in the build to the fight. And in front of a rowdy pro-Canelo crowd of 16,586 at the MGM Grand Garden Arena, Canelo made good on his promise by applying pressure every single moment of the fight.

Plant did his best but lacked the power to force Canelo to respect him. He did use movement and a stiff jab to score, but that clearly wasn’t enough against a man who was on a mission to seek and destroy.

Nobody, especially not Plant, would stand in his way of becoming the first Mexican undisputed champion.

As the rounds progressed, Alvarez closed the distance and bludgeoned Plant with powerful hooks and chopping right hands. Barely a jab was thrown by the Mexican superstar and the pressure proved to be too much. To his credit, Plant seemed to take the punches well and fought back when it seemed to get rough. But in the 11th, Canelo hit his mark with a blistering left hook followed by an uppercut that put the IBF champion down. 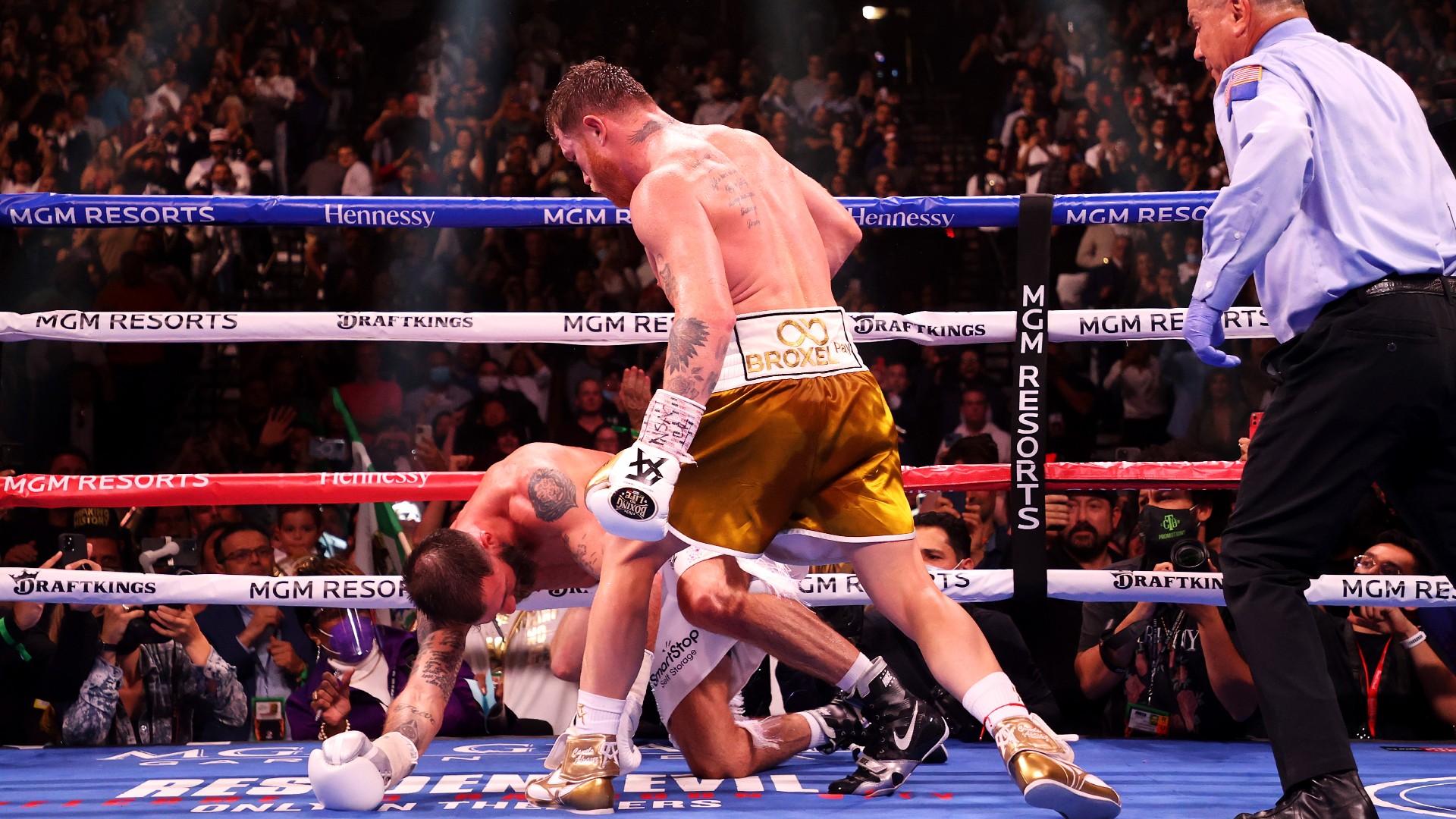 Plant made it to his feet but was met with a ferocious barrage of punches that put him down and out for good at 1:05 of the round.

Here’s how it all went down.

MORE: Who will Canelo Alvarez fight after Caleb Plant?

Round 11 (12:30 a.m.): Canelo digs with two hooks to the body but Plant pops the jab. Hard left hook and a right hand sends Plant DOWN!!!! Plant is getting smoked! Canelo is all over him! A blistering combination sends Plant to his DOOM. It’s OVERRRRRRRRRR!!!!

Round 10 (12:26 a.m.): They exchange hooks and do some infighting. Nice three-punch combination by Plant. There are a few nip-and-tuck rounds here. Plant ain’t going away at all. He’s here to fight. Canelo lifts Plant’s head with a left hand but Plant fires back with a combination of his own. Nice combination again by Plant to close the round. 10-9, Plant (97-93, Canelo)

Round 9 (12:22 a.m.): Plant lands a quick combination and defensively sounds. Canelo bludgeons him on the inside. Hard left hook by Canelo moves Plant off the ropes. Plant fires a one-two that lands off the ropes. Pair of hooks by Canelo with the last one landing. Plant is scraped by a right hand. Nice combination by Plant. Left uppercut by Plant to close the round. 10-9, Canelo (88-83, Canelo)

Round 8 (12:18 a.m.): Canelo launches a trio of left hooks and digs to the body. Canelo lands to the head and body with Plant on the ropes. Plant lands to the body. Plant is still here and still fighting but it’s another Canelo round. 10-9, Canelo (78-74, Canelo)

Round 7 (12:14 a.m.): Canelo is on the hunt again and lands a left hand. He senses that Plant is wearing down. Canelo cracks Plant with a left uppercut. Plant trying to fight him off and lands a hard short left that seems to tick Canelo off. Canelo has his back on the ropes and waiting for Plant to attack. Plant won’t throw and the crowd is restless. Canelo has had enough and comes forward. They clash heads. Canelo just cracked Plant with a nasty three-punch combination to close the round. 10-9, Canelo (68-65, Canelo)

Round 6 (12:10 a.m.): Plant meets him in the center of the ring to start Round 6 but Canelo quickly backs him into the ropes and lands a left hand followed by a chopping right hook. Canelo throwing the left hook with a lot of power. Canelo lands a stiff three-punch combination and a left hand followed by a right that hurts Plant. A left hand by Canelo that rocks Plant. Canelo has now slid into a powerful and brutal rhythm. It’s becoming obvious that Plant isn’t taking these punches the same as he was earlier. 10-9, Canelo (58-56, Canelo)

Round 5 (12:06 a.m.): Plant is still throwing hands but Canelo is unbothered. Like, completely unbothered. Hard uppercut by Canelo. Body and head hook by Canelo. Plant firing more jabs but Canelo is hunting him down. Interesting round. Plant threw a lot more punches but Canelo landed a couple of hard shots. Plant on activity. 10-9 Plant (48-47 Canelo)

Round 4 (12:03 a.m.): Plant is still moving very well but Canelo finally catches up and lays into him with a combination. Canelo is drilling the body. Plant doesn’t have enough on his punches to back Canelo off. Canelo barely misses an overhand right. Plant still throwing and Canelo lights him up with a left hook. The lack of power is a problem for Plant. 10-9, Canelo (39-37, Canelo)

Round 3 (11:58 p.m.): Plant going to work quickly in the middle of the ring and lands a jab and hook. Canelo shrugs it off and comes forward. Uppercut by Plant and Canelo responds with a pair of body shots. Stiff jab by Plant. Hard left hook by Canelo backs Plant up. Canelo with a pair of left hooks up top. Plant moving well and shoves a jab in Canelo’s face. Left to the body by Canelo. Plant with a nice hook to the body. Canelo goes right back. Solid round. 10-9., Canelo (29-28, Canelo)

Round 2 (11:54 p.m.): Plant pops Canelo with a jab but it’s already clear he’s fighting off the hunter. Canelo lands a hard uppercut on the inside. Plant with an uppercut. Canelo still coming in. Left hook lands by Canelo. A whole lot of pressure by Canelo. Plant with a great series of jabs. Canelo working the body with a hook and giving him no breathing room. Plant fighting well but that pressure is a lot to deal with. He’s going to need to land something that makes Canelo respect him. 10-9, Plant (19-19)

Round 1 (11:50 p.m.): Plant meets Canelo in the center of the ring and fires a bunch of jabs. Canelo holds his ground and is looking for an opening. Canelo closing the distance and lands a hard right hand. Canelo backs Plant into the ropes and unloads. Plant defends and circles off. Nice jab lands by Plant but Canelo is on the hunt. Left hand to the body by Canelo. 10-9, Canelo

11:39 p.m.: Plant enters the ring to a chorus of boos while being accompanied by Hip Hop artist Conway the Machine. As for Canelo? The roof blew off for his entrance with the lead singer of Mana joining him. Both fighters are in the ring. It’s time.

11:22 p.m.: The main event is upon us. National anthems first and fighters to the ring second.

Anthony Dirrell puts away Marco Hernandez in fourth round

11:10 p.m.: Well, that didn’t last long. Anthony Dirrell obliterated Hernandez with an uppercut that he threw all the way from Michigan. Hernandez somehow managed to get to his feet but he had no legs and the fight was stopped in the fourth round just 22 seconds into the frame. Dirrell will surely aim to work his way back into title contention at 37 years of age.

10:57 p.m.: The co-main event is up now between Dirrell and Hernandez. Dirrell is a 3-1 favorite and opens up with guns blazing. Certainly, he’s doing this to make a statement in order to get another title opportunity but he’ll have to be careful against Hernandez.

10:43 p.m.: As expected, Vargas cruised to a decision but many expected a knockout. Nevertheless, an easy win against a tough opponent.

10:34 p.m.: Well, this fight is entering the final round. Vargas is up and Baez won’t go away. Can he get the finish or is Vargas fine with a decision here?

10:14 p.m.: We’re heading into the fifth round and Baez is still hanging around. He’s getting outclassed by Vargas but he won’t go away. But it certainly feels like Vargas is chipping away with blistering combinations and a long jab.

Elvis Rodriguez knocks out Juan Pablo Romero in the 5th round

9:39 p.m.: Rodriguez needed a little time to warm up and finished the job with a beautiful straight left hand that sank Romero’s battleship in the final seconds of the fifth round. Romero sat on the canvas and watched the referee count him out. Excellent performance and a great way to get back to his winning ways.

9:35 p.m.: It looked like Romero was starting to get ahead in the fight by taking the second and third rounds until Rodriguez leveled him with a left hand and followed with a combination that sent Romero to the canvas. A very competitive and fun fight to open the PPV.

9:26 p.m.: Elvis Rodrigue and Juan Pablo Romero might be getting ready to give us a banger for the opening fight of the PPV. The action is picking up in round 2 with some heated exchanges.

9:13 p.m.: We’re getting things started with Elvis Rodriguez looking to get back on the winning track against Juan Pablo Romero. Rodriguez suffered his first loss by majority decision against Kenneth Sims Jr. The knockout artist looks to get a finish against Romero, who competed in the 2016 Olympics.

The main card for Alvarez vs. Plant is scheduled to begin at 9 p.m. ET, with the two fighters expected to enter the ring around midnight. The timing of the main event could change depending on the length of the undercard fights.

How to watch Canelo Alvarez vs. Caleb Plant