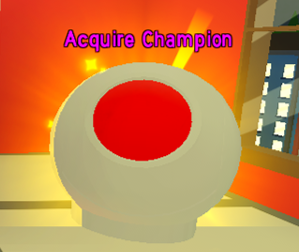 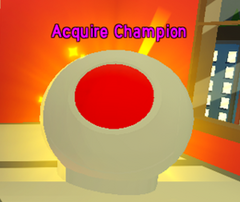 Chamber (Saiyan Pod) that you click on to purchase a Champion

Champions are a game mechanic introduced in UPDATE 9. Champions help you in training and also fighting (similar to pets in other games). It costs 5,000 Chikara Shards to receive a champion which you can buy from the Saiyan pod inside any spawn area in every dimension, not counting the Tournament Dimension. The only exceptions to this are certain champions that can be bought in the Tournament Dimension and those that can be unlocked by the Fighting Pass. You can also sell champions for Chikara shards depending on rarity. To prevent accidentally selling a valuable champion, use the lock mechanism. If you try to sell or trade a locked champion it will fail and tell you to unlock it in order to preform the requested action. Stats gained from Champions are unaffected by gamepasses, the 5% increased training boost from joining the BlockZone group, server boosts, event boosts, or the boosts bought with Robux. Here are all the Champions from Common to Fighting Pass rarity:

Champion trading is a feature released in UPDATE 10 on Anime Fighting Simulator. To trade a champion, go to champions and click the trade button at the top left. Each rarity has a specific class that the OTHER person needs to be able to put out a champion. NOTE: You cannot trade Fighting Pass Champions.

Here are the classes required: