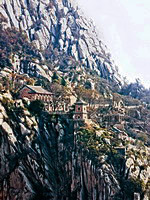 There are a lot of most incredible rumors about martial arts of China. Who has not seen the famous film “Crouching Tiger, Hidden Dragon”, where Chinese actors performed incredible stunts of various Chinese and martial arts. Today there are many different schools, based on traditional Chinese martial arts.

The history of Chinese martial arts dates back to the III millennium BC, when the Emperor Huangdi developed the theory and practice of combat conducting, which was named jiao di (modern shuai jiao). This martial art is not only hand-to-hand fighting, but also the knowledge of tender points of an enemy, in order to immobilize or kill him. This is one of the most difficult, so far, Chinese martial arts, requiring not only physical strength, but also the knowledge of medicine and philosophy.

One of the most common kinds of Chinese martial arts, widely used all over the world is wushu. Wu Shu, literally translated as “military arts”, is divided into two main directions: “long fist” and “short-armed blow”. The first direction includes the styles of arm’s length battles. The second direction, respectively, is fighting at close quarters. Wushu has many directions and styles. This kind of martial arts can be conducted both hand-to-hand and with weapons. In addition, it is one of the most popular forms of martial arts, widely used in training of elite military squads both in China and around the world.

Martial arts are an integral part of Chinese culture, so there are a lot of philosophical treatises written on the subject, the most famous of which is “The Art of War” by Sun Tzu. The book was written in the VI century BC. It deals not only with the warfare strategy and policy, but also it develops a whole philosophy of martial arts. The treatise consists of 13 chapters. It has not lost its relevance even today, as it is considered one of the main textbook on strategy and history of military art and studied at such renowned military academies like West Point in the United States.

Martial arts of China are closely related to religion. Buddhist and Taoist monks of ancient times were not only the best doctors, but also great warriors. Today, they are considered recognized masters of martial arts, particularly the Shaolin monks. This ancient monastery and its inhabitants have carefully been keeping the glorious traditions of Chinese martial arts alive throughout many generations.

The Shaolin Temple is open for visitors. The students come there from all over the world to take a few lessons from the recognized masters of kung fu and qigong style (body self-regulation – the basis of all Chinese martial arts). There, you can learn different techniques of meditation, as well as get acquainted with the history of Shaolin, which is full of secrets and mysteries. You must visit the famous Lotus Temple and the cave where a monk meditating, spent 9 years. The unique atmosphere, which reigns there not only brings calm, but also charges the positive energy.