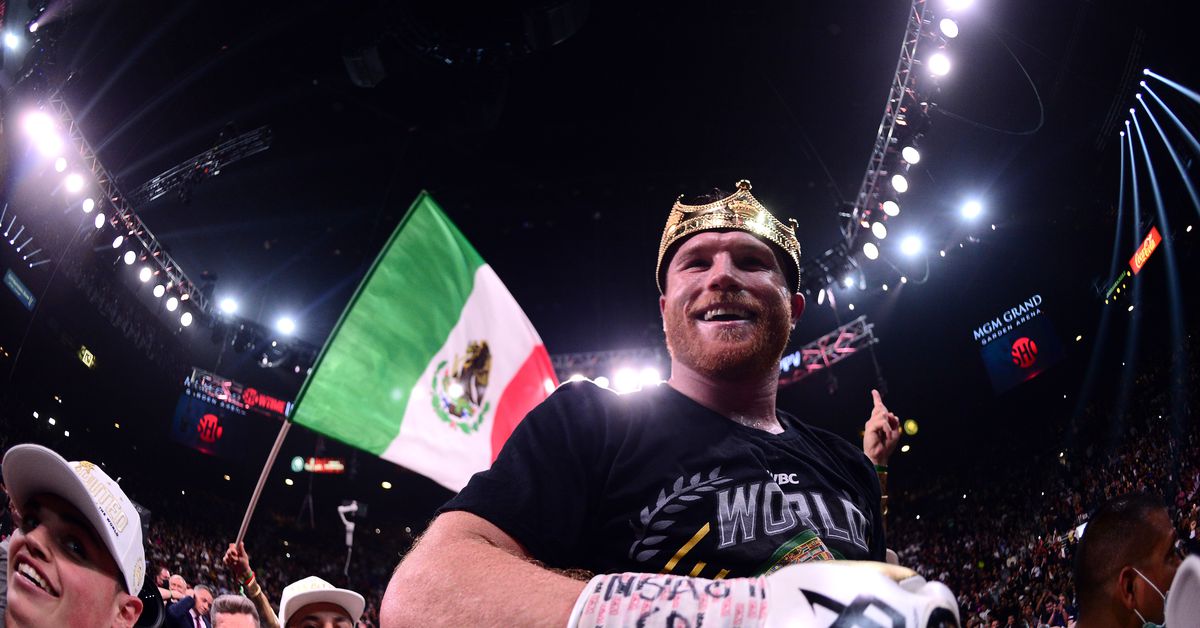 At the UFC 268 press conference, White copped to multitasking, which he said was the result of a $100,000 bet on Alvarez to win by knockout. It wasn’t because he was trying to line up UFC welterweight champ Kamaru Usman’s next fight.

Usman made headlines by talking up a boxing match with Alvarez prior to his rematch with Colby Covington, the latest UFC fighter to seek fortune and fame inside the squared circle. His only roadblock is White, who’s not eager for the welterweight champ to follow in Conor McGregor’s footsteps – particularly after Saturday.

“I watched the Canelo fight tonight,” White said told reporters. “You don’t want to fight Canelo. C’mon, man, let’s stop this sh*t. If Canelo wants to come over here, let’s do it. He don’t want to box Canelo.”

The timing on such a matchup would be prime given Usman’s status atop the pound-for-pound rankings and Alvarez’s history-making turn unifying the super middleweight title. Then again, White doesn’t exactly get along with Alvarez’s current promoter, Showtime, which elected to counter-program UFC 268 on Saturday night. The UFC chief called the decision “insane” and added “it literally doesn’t make sense,” though he said Saturday’s octagon event blew away pay-per-view projections and landed at No. 4 on the all-time live gate list for Madison Square Garden. He also took another shot at Showtime by criticizing the $79.99 price tag.

“But I like Canelo,” White said with a smile. “I watched the fight.”

Usman was obviously too busy to do the same. After his third title fight in 2021, he gave the impression that the grind of his championship schedule was beginning to wear him out. A rematch with Covington, whom he outpointed by unanimous decision, wasn’t out of the question, but it was also dependent on whether he was still around in the sport. A fight with Alvarez was about giving him a new challenge to work for.

When told of White’s take on an Alvarez showdown, he made a sour face.

“Uh, Dana doesn’t know that,” Usman said. “Like I said, I want something that scares me. If I’m going to leave my daughter for another 12 weeks or more, it’s gotta be something that really, really gets me up. And I like that. I want challenge myself.

“I know a lot of people are going to talk down and say a lot of bullsh*t – ‘Oh yeah, you don’t want this, you don’t want that.’ Yeah, don’t get me wrong, he’s a master at what he does. I love it and I respect it. I want to challenge myself in that way. The last time I was an underdog, we saw what happened. I get it, but we’re the ones who will take that risk. We’re the ones who are willing to go over there and take that risk. They won’t dare come over here and take that risk.”

That said, it’s not all about the thrill of competition for Usman. How could it be? With Alvarez reportedly taking home a guaranteed $40 million to box Plant, it’s only reasonable to think he could snag a healthy fraction of that.

Challenge or not, that would be impossible to turn down. When a reporter asked Usman if he’d box Alvarez for charity, he made another face.

“What? Charity? Are we wearing MMA gloves?” he said as the room erupted in laughter. “No, c’mon. This guy. No listen, of course we want the money.”

White’s interest in Alvarez wasn’t charitable, either. When the super middleweight boxing champ knocked out Plant inside the distance, the UFC president won over $41,000.

Usman wants his own turn to bet on himself.