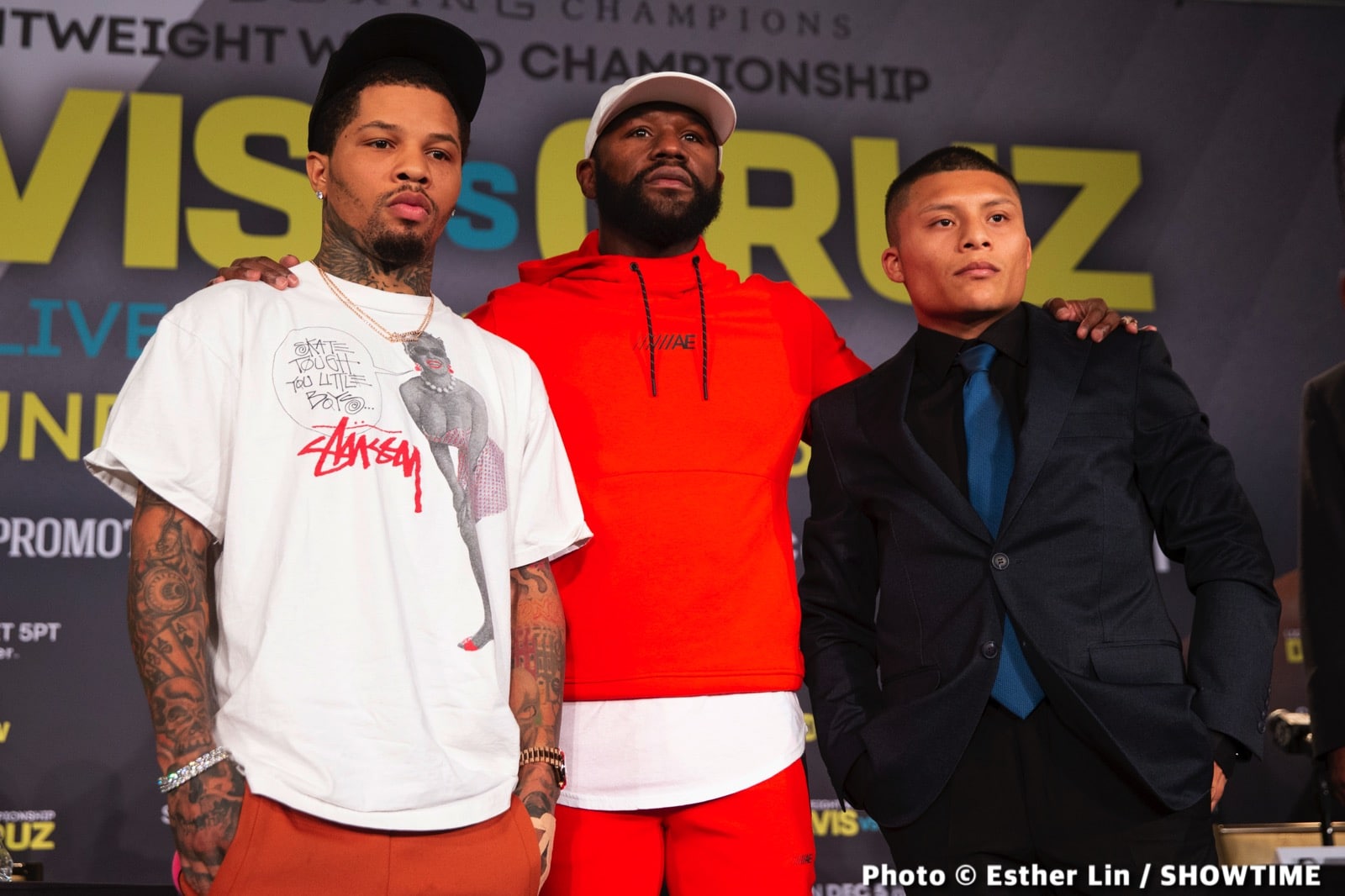 Cruz, ranked No. 2 in the IBF, steps in to replace Rolando Romero.

Tickets for the live event, which is promoted by Mayweather Promotions, GTD Promotions and TGB Promotions, are on sale now and can be purchased at AXS.com.

Davis’ third-straight pay-per-view headlining attraction will see him battle the hardnosed Cruz, who has rightly earned the nickname “Pitbull’’ during his professional career.

“This is going to be a tremendous fight on SHOWTIME PPV,” said Leonard Ellerbe, CEO of Mayweather Promotions. “Isaac Cruz was ready for this big opportunity and I expect him to come ready to deliver the fight of his life. However, Gervonta Davis is a generational talent who’s only getting better. This fight is going to end in spectacular fashion on December 5.”

“Kudos to Isaac Cruz for stepping in as a replacement opponent in a high-pressure, pay per view fight against one of the brightest stars in boxing in Gervonta Davis,’’ said Tom Brown, President of TGB Promotions. “Cruz presents a different, and some would argue a more difficult challenge to Tank Davis. Cruz won’t back down and he’ll bring the fight to Davis from the opening bell. We’ve all seen Gervonta’s blend of superb boxing skills and explosive power, and we know what he’s capable of. It will be the irresistible force versus the immovable object, which means fireworks at STAPLES Center and on SHOWTIME PPV on Sunday, December 5.’’

Davis (25-0, 24 KOs), star of the Mayweather Promotions stable, added another highlight filled performance in June, as he stopped previously unbeaten Mario Barrios to capture a 140-pound title and become a three-division world champion. The Baltimore-native captured his lightweight championship with a 12th-round knockout of former champion Yuriorkis Gamboa in December 2019.

“I respect Isaac Cruz for stepping up and taking the fight, but everyone knows what I do,” said Davis. “I come in looking for the knockout and that’s exactly what I’m going to do in this fight. I’m back in Los Angeles where the stars shine and I’m going to light it up against Isaac Cruz at STAPLES Center on December 5.’’

The 23-year-old Cruz (22-1-1, 15 KOs) will be looking to rough up Davis and make him work overtime if he wants to come away with the win. A native of Mexico City, Cruz shot up the lightweight rankings in 2020, announcing his presence with an electrifying first-round knockout over veteran Diego Magdaleno in September. Cruz followed that up in 2021 by winning a unanimous decision over previously unbeaten Matías Romero in March, and most recently defeating former champion Francisco Vargas by decision in June. Since making his U.S. debut in December 2019, the 23-year-old has gone unbeaten in his next four ring appearances, appearing on SHOWTIME three times in addition to beating Magdaleno on the Gervonta Davis vs. Leo Santa Cruz SHOWTIME PPV undercard.

“First I want to thank Gervonta Davis and his team for this opportunity – an opportunity I won’t let get past me,’’ Cruz said. “God willing I’ll be world champion on December 5. This fight is a very big motivation for me as a professional and as a personal goal. I’m sure after December 5 everyone in boxing will know the name Isaac ‘Pitbull’ Cruz.’’

Here is what the press conference participants had to say Monday:

“I’m happy and excited to be in this position, I’ve been working hard getting ready for this new opponent. I know Cruz is going to come to fight. The fans are going to be the winners in this fight, because we’re both coming in prepared to be at our best. I’m ready to put on a great show on December 5

“Anything can happen in boxing, so I just try to stay on task. I’m always ready to step up to any challenge thrown my way and get the job done.

“This is a more interesting fight now, because we both come forward. This is going to be something great for the fans and another exciting night for the sport of boxing. May the best man win. We’re both coming with our ‘A’ games.

“He can say I haven’t faced someone like him, but he’s never fought anybody like me either. I can box and I can hit. We’ll see what he’s saying when he gets hit in the face.

“December 5 is going to be fireworks for sure. It’s going to be something you can’t miss. Don’t go get your popcorn or anything like that during this fight. This is another tough task, but this is what I’m made for.

“You always have to adapt in boxing. No matter what comes your way. I’m going to adapt to Cruz. I’m figuring out every day how Cruz is thinking and what he’s going to bring to the fight.

“Cruz has impressed me in his past fights. He comes in there to win. He doesn’t look to just hang in there. He wants to go in and take it. He’s not an opponent I can overlook. A win over him would be big for me.

“It is different training to fight a shorter opponent. I usually fight guys taller than me, so it’s an adjustment. It’s another thing I have to adapt to. Everything we’re doing is to figure him out.

“December 5 is going to be a fireworks show. This is going to be one of the best fights of the year. It’s not just a boxing match, it’s an event. Make sure you come out.

“I’m excited to be in this position. I’m grateful for it. I’m trying to continue to grow as a fighter and just improve each day.”

“December 5 is going to be a great fight. I’m ready to shock the world and become the next star in the pantheon of Mexican boxing champions.

“I’m ready to put on a show on December 5 at STAPLES Center. There were a wide-array of feelings when I knew I got this fight, but most of all, it made me really motivated to be ready for this opportunity.

“We are not overconfident in any way, but Gervonta has not fought anyone with my style and with my characteristics. We’re working really hard to make sure my style will work the best that it can on December 5.

“The real winner of this fight is going to be the fans. ‘Pitbull’ and ‘Tank’ are going to crash into each other and people will be on the edge of their seats.

“The key to defeating Gervonta is for me to want it more. I want that belt in my hand. It’s going to come down to determination.

“I’m always thankful for the opportunities I get. It’s my job to work hard and take advantage of each opportunity as I get them. I’m going to come forward and present my power. Once he feels my power, the fight is going to turn toward me.

“It’s up to Gervonta to show that he’s a superstar in the ring. I don’t see him as an impossible task to defeat at all.

“I always want to fight the best and Gervonta is one of the best. I’m training really hard so that I’m up to that challenge.”

“This is an exciting matchup, with the most exciting fighter in the world, Gervonta Davis, taking on Isaac Cruz, who is a tough lightweight and a bonafide top-10 contender. He has an action-packed style himself and he’s looking to knock ‘Tank’ off his throne.

“Mexico is riding high off of Canelo Alvarez’s historic undisputed championship victory and now there’s a big opportunity for Cruz to stand up for his country and take ‘Tank’ out. I’ve had my eye on Cruz since he knocked out Diego Magdaleno on ‘Tank’s’ undercard last year. I was very impressed with the knockout and knew he might get this opportunity down the line.

“’Tank’ is always ready. He stays ready, so he doesn’t have to get ready. This fight is going to be nothing but fireworks on December 5 and it’s definitely ending in a knockout.

“Cruz is coming to fight. He’s not a last-minute replacement. He was already fighting on this card, so he’s going to be ready. ‘Tank’ is going to have to be on point for every second of this fight, because Cruz puts a lot of mental pressure on you with the way that he

What channel is Evander Holyfield vs. Vitor Belfort on tonight? How to watch, buy 2021 fight on pay-per-view