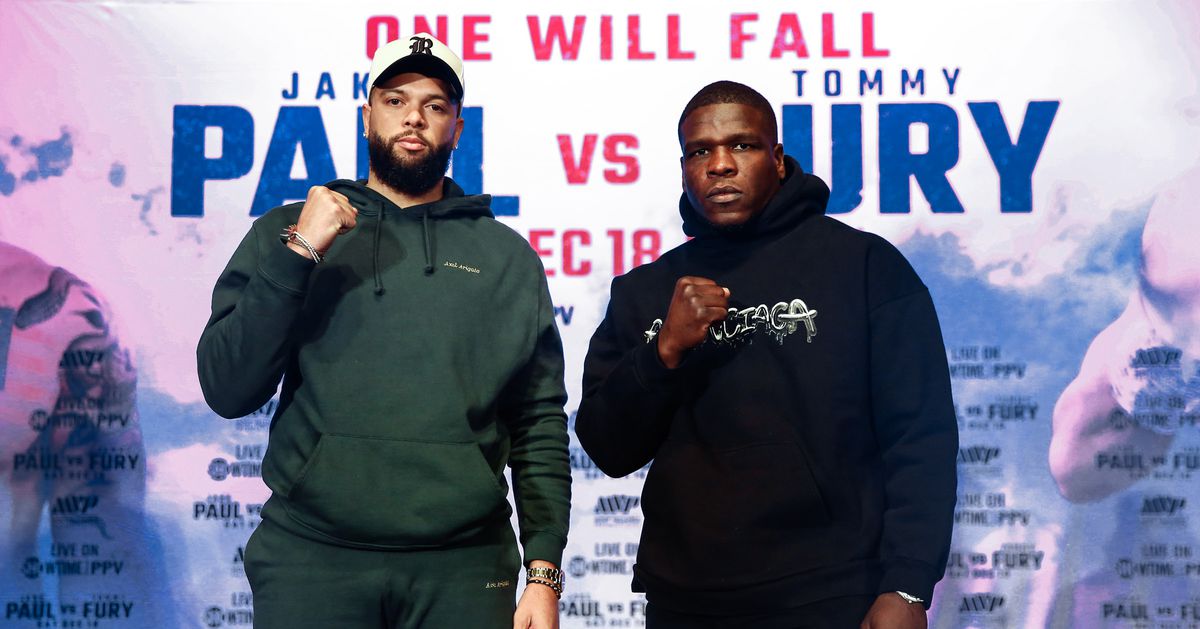 On Dec. 18, the sports stars will make their professional boxing debuts on the undercard of Showtime’s Jake Paul vs. Tommy Fury event at Amalie Arena in Tampa, Fla. Williams and Gore were standouts in basketball and American football respectively, with Williams making three NBA All-Star teams and leading a competitive Utah Jazz squad for several seasons, and Gore recently retiring as one of the most productive running backs in NFL history.

The two were center stage at a press conference Tuesday in New York City and both were given the chance to explain their reasoning for booking a pro boxing fight.

“I’ve always been drawn to combat sports, I grew up wrestling first sport,” Williams said. “Wrestled all the way up to high school and I’ve always been a big boxing fan, big MMA fan, and part-owner of Fortis MMA in Dallas, Texas, and I’ve done a lot of training there over the last six years.

“I’ve always wanted to, I had the idea of maybe doing a fight, maybe an MMA fight. I actually had one right before COVID hit that I was in training camp for and my opponent pulled out, so it was always kind of in the back of my mind and I’ve stayed in shape and I’ve stayed training. … It’s one of those opportunities that comes along and if I didn’t take it I feel like I’d be kicking myself for not jumping on that opportunity for the rest of my life, so here I am.”

Williams’ combat sports credentials include not only a couple of state wrestling titles in his youth — he put wrestling aside when he reached high school due to it coinciding with basketball season — but also the opportunity to train at Fortis MMA, a gym that currently houses UFC standouts Jared Cannonier, Uriah Hall, Alex Morono, and Miles Johns, among numerous others.

On Gore’s side, he’s been focused more on boxing since he was drafted into the NFL in 2005. For the NFL’s record-holder for most games played by a running back, getting into boxing was initially a matter of self-preservation.

“I’ve always loved boxing, especially since I started doing it since 2005, my first time getting drafted,” Gore said. “I was doing it because I was saving my legs because I played running back. I was doing it for cardio and I just fell in love with how hard it was and I’m very competitive. When I first went in, I felt like I couldn’t even fight. I just kept doing it and kept getting better and better.

“I told my boy during the summer, when I didn’t go to training camp, being around my kids, and I started being around the guys at the boxing gym every day and they just was like, ‘Man, you got the basics, you should try to get a fight,’ since they’ve seen all the Jake Paul stuff going on. I started thinking about it and I called my boy Malki [Kawa] and I’m like, ‘Hey, I think I might want to take a chance and see what I can do in there.’ Dec. 18, here we go.”

Gore added that his reasons for boxing are definitely not just for a payday. The 15-year NFL veteran was cashing pro football checks as recently as last year.

Williams said that he’s received mostly positive feedback from his peers in the basketball world.

“There’s all types of things, but for the most part everybody’s behind me,” Williams said. “There’s been some people like, ‘You’re fighting Frank Gore? What are you doing? What are you thinking about?’ But that’s okay.

One fate Williams would certainly like to avoid is that of his former contemporary Nate Robinson. The diminutive NBA veteran faced Paul in a boxing match in November of last year and was blasted unconscious in a clip that instantly went viral.

Gore doubts that the fight with Williams will play out the same way.

“I can’t look at it like that,” Gore said. “Him training MMA, you gotta have some type of toughness. I’m not looking at it no NBA, whatever Nate Robinson did — this man’s different. He’s been doing MMA for six years, so I gotta respect that. He’s been wrestling since he was a kid, I gotta respect that. I’m training my behind off, the only thing I can do is worry about me though. I’m training every day and I’m looking for the challenge.”

Having competed at the highest levels of their sport for years, one would assume that Williams and Gore are prepared for the toughest challenges that combat sports has to offer. That assumption would be mostly correct, but it’s actually a deceptively simple aspect of training that tripped up both athletes.

“I would say jogging,” Gore said of the biggest challenge ahead of his first pro fight. “Because playing football, we never jogged, we always sprint, pull sleds. I had to train myself to really jog. To put my mind somewhere else to keep going. I would say the toughest thing for me is jogging.

“Also, he probably feel the same, but when you the top guy in your sport and now you go into another guy’s sport, but you gotta train with ‘em, they don’t care you the football player. You’ve got to get in the ring and spar, they’re not taking it easy on you. They’re just pounding, you’ve got to stand in there and go back and forth. I’d say that’s kind of tough too.”

Williams added that it’s simply a matter of being dedicated to one set of disciplines for so long and then having to completely change gears. That, and all the jogging.

“I’m with Frank on the running,” Williams said. “I ran four miles yesterday. That’s four more miles than I’ve ever ran in my life in one continuous go. It wasn’t a thing for us as well. More sprints, shuttle runs, suicides, things like that. It’s a different level of cardio and it’s just a different feeling.

“Basketball, or football for him, that’s our comfort zone. We’re comfortable with that, we’re comfortable with that work. Fighting is getting out of your comfort zone. It’s learning to get hit in the face and sit in there and walking through it and being okay with it. It takes some time. It took me a couple of years. It’s just that challenge we keep talking about. It’s a new challenge as athletes, especially since I’ve been retired for four years now. You miss competing, you miss having something to train for, something to look forward to. It gives me that.”