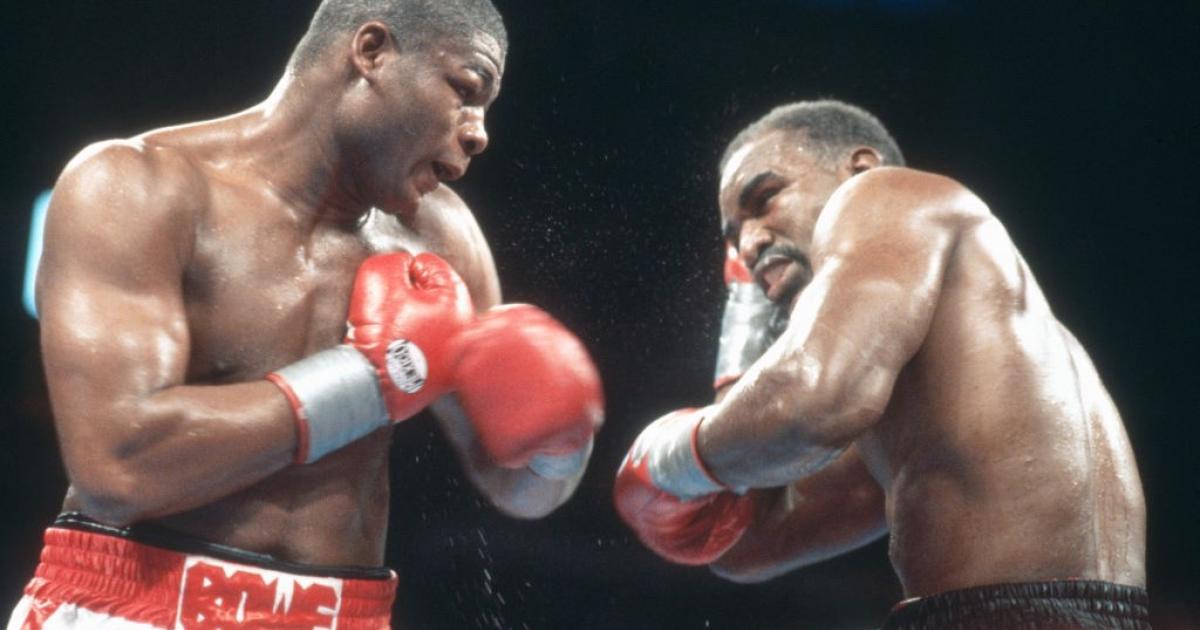 In an eagerly anticipated showdown between unbeaten fighters, the undisputed heavyweight champion of the world Evander Holyfield was matched against No. 1 challenger Riddick Bowe at the Thomas & Mack Centre in Las Vegas. It’s rare for a super fight to live up to its billing, but this one exceeded all expectations.

Holyfield had won 28 fights, 22 of them inside the distance. A light heavyweight bronze medalist from the 1984 Olympics, “The Real Deal” had become boxing’s first undisputed cruiserweight champion before launching an incursion into the glamor division. It took Holyfield just three rounds to wrench the heavyweight crown from Mike Tyson conqueror James “Buster” Douglas, but subsequent decision wins over aging legends George Foreman and Larry Holmes, as well as a close call against late-replacement Bert Cooper (TKO 7), led to critics questioning his validity as champion.

That outlook did not age well.

Bowe (31-0, 27 KOs) had captured super heavyweight silver at the 1988 Olympics and adapted to the professional game quickly. The 26-year-old New Yorker had been largely dominant against a raft of journeymen and over-the-hill ex-champions, but Holyfield represented a significant step up in class. And some Bowe detractors pointed to his Olympic final defeat to Lennox Lewis as evidence that he lacked fighting heart.

They couldn’t have been more wrong.

“Bowe was a young guy, but he was always bigger than me,” said Holyfield during a recent interview with The Sporting News. “I knew how much of a threat he was because we’d sparred together. The very first time we sparred, I was the cruiserweight champion, he was an amateur, and he was trying to take me out. I was tearing him up [in sparring], and I was asking myself, ‘How in the world does this guy think [he can take me out?]’

“But Riddick was a good fighter — a real good fighter. He could fight inside and outside. He wasn’t just a big puncher; he was a skillful fighter, he had the jab, and he boxed very well. Bowe was more of a challenge than pretty much all of them except [Mike] Tyson. Any time I fought Bowe, I knew it was going to be a tough fight. The only person who ever had my heart racing as fast as that was Tyson.” 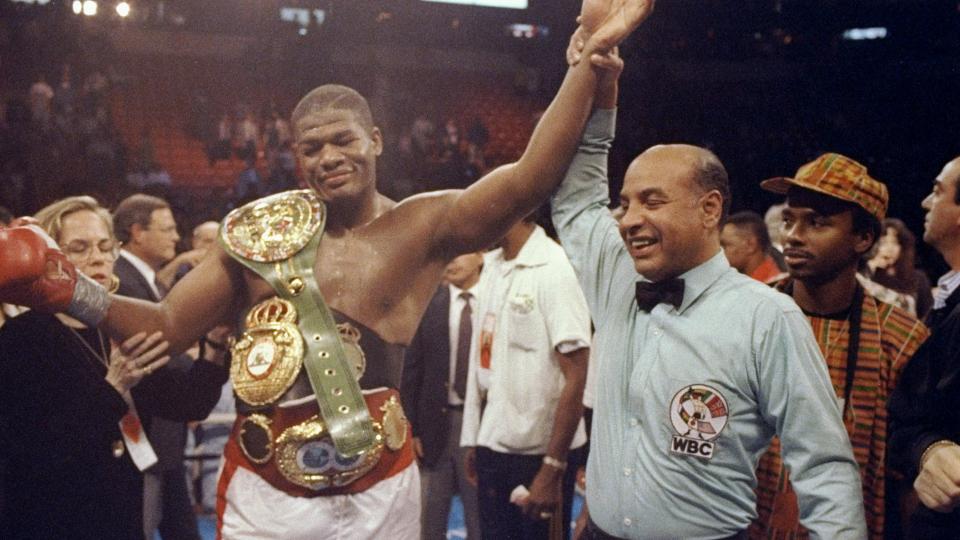 Holyfield was put to the test quickly by Bowe. The 235-pound challenger had a 30-pound weight advantage over his opponent – and he knew how to use it. When the action drifted to the inside, the bigger man worked the body before switching to the head with hooks and uppercuts. Entering Round 10, Holyfield was behind on points and things were about to get much worse. Early in the session, Bowe landed flush with a rocket right uppercut that hurt the champion badly. Suddenly, the deeply religious Holyfield was forced to call on a higher power.

“If I have the chance to say, ‘Help me, Jesus,’ then I’m going to say it,” recalled Holyfield, who stayed upright despite absorbing a pulverising follow-up attack. “ When you’re a winner, it doesn’t make a difference what happens in the ring. That’s what God’s for – if you’re in trouble, then call him. I was calling on God before that fight even started.

“I’m not a quitter, and you learn to deal with these things, even in practice. You get more of a hard time in practice than you do in fights because you’re doing it over and over again. It’s difficult, but that’s what makes a fighter. You have to test yourself and go through these challenges to be the very best.”

Not only did Holyfield survive Bowe’s best barrage, but he won the remainder of the round in a stunning display of resilience and courage. The capacity crowd at the Thomas & Mack Centre stood as one for the champion, who rattled Bowe with a series of hooks and uppercuts before lowering the boom with a big right to the head. When the bell sounded to end one of the greatest rounds in heavyweight championship history, both fighters tapped the other gently in a mutual show of respect.

Bowe scored an official knockdown in the 11th and went all out for the finish a second time, but Holyfield was going nowhere. The gutsy champion battled through hell and was still firing bombs as the bell rang to end what had been a magnificent prize fight. The scores were unanimous in favour of Bowe: 117-110, 117-110, and 115-112.

The irony about Bowe’s greatest triumph is that it was the beginning of his decline. While he would emerge 2-1 up in the trilogy with Holyfield, the affable young star from Brooklyn would never get his body into the same condition or perform at this level again. Bowe’s career on the world scene ended in 1996 following a pair of infamous disqualification wins over enigmatic Polish contender Andrew Golota. An ill-advised comeback, which began in 2004, ended after three low-key wins.

Conversely, Bowe’s great rival marched the golden path to boxing immortality. Holyfield scored wins over Bowe, Ray Mercer, Mike Tyson (twice), and Michael Moorer, and despite falling short against fellow-great Lennox Lewis, he became the only four-time heavyweight champion in boxing history, when he outpointed John Ruiz for the vacant WBA version of the title in August 2000.

“Some people just think about being good, and once they become good, then they think that’s it,” reasoned Holyfield when asked why Bowe lost interest. “Riddick and I became real good friends, and I would talk to him about things like this. He’d say, ‘Man, I only wanted to be the champ. I became the champ and that was good.’ I told him, ‘Yeah, I became the champ, but I wanted to be the best in the game.’ I didn’t plan on losing to become a four-time champion. If someone rises to the occasion to beat me, then I need to get even better. With me, it was always about being the very best.”

MORE: How to watch Tyson Fury vs. Derek Chisora 3

Both ex-champs entered the International Boxing Hall of Fame two years apart – Bowe in 2015 and Holyfield in 2017. However, while Bowe proved his class and courage during that epic first encounter with Holyfield, his career will always be remembered as “promise unfulfilled.” On the other hand, Holyfield, the consensus-best cruiserweight ever and a four-time heavyweight champion, will forever be remembered as an all-time great. That’s the compensation for longevity in boxing, though Holyfield did stay on too long.

As a duet, however, Evander Holyfield and Riddick Bowe produced a heavyweight trilogy that stands tall alongside the Muhammad Ali-Joe Frazier series.

“I never thought about [being in fights like Ali-Frazier,] I only thought about being the best I could be,” stated Holyfield. “If I’m at my best, and [the opponent] is at their best, then I know this person has to be in great shape to beat me. I lived and breathed the game of boxing — I loved it — and it’s one of the things that I did well. I didn’t do many things well, but I did well in boxing (laughs).

“The rivalry with Bowe was special, but I didn’t do what my momma told me to do. She said, ‘If you’re competing with them, then don’t be friends — keep them at a distance. You don’t want to get too close to them.’ Riddick and I became good buddies, and with me being four years older, I felt it was ok to give him something. Turns out, I gave him too much (laughs).”

Evander Holyfield-Riddick Bowe 1 took place 30 years ago, and you can count on one hand the number of heavyweight championship fights that have come close to that level of quality since. Perhaps only Anthony Joshua’s epic triumph over Wladimir Klitschko or Tyson Fury’s brutal knockout win over Deontay Wilder in their trilogy bout come close.

So why are great heavyweight championship fights such a rarity?

“Some fighters today are worried that they’re going to be hurt,” opined Holyfield. “Why would you get into a game like boxing if you’re worried about being hurt? It’s fear that keeps people from becoming the very best. I was an entertainer and it was my job to entertain the people who want to see a fight. What do they want to see? They want to see you beat the daylights out of that guy.

“I tell rodeo guys, ‘I would never get on that bull — you’re crazy!’ But they tell me that I’m crazy for boxing. When you’re good at something you don’t view it as crazy. The rodeo guys have been doing that from a young age, and I’ve been boxing since the age of 12. You don’t worry about being hurt when you’re in control of your situation. It’s all down to how you practice, and you’ll learn from your mistakes.”