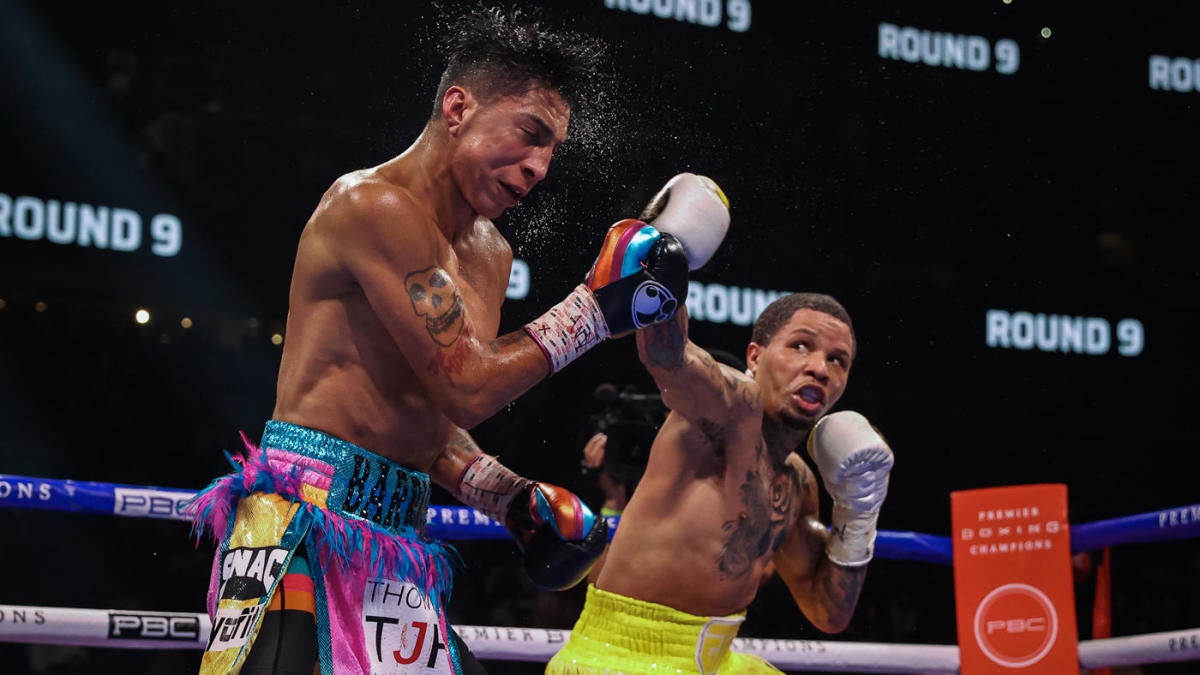 Gervonta “Tank” Davis called his move up two weight classes to 140 pounds for Saturday’s pay-per-view in Atlanta a move that proved he was “daring to be great.” Those who watched his performance would be hard-pressed to disagree.

Davis (25-0, 24 KOs), a 26-year-old rising star, headlined his second consecutive PPV card and added a world title in a third weight class by stopping Mario Barrios (26-1, 17 KOs), the WBA regular champion at 140 pounds, in Round 11 of a thrilling and dramatic slugfest inside State Farm Arena.

Although Davis was leading on all three scorecards at the time of the stoppage, Barrios was busier and largely fighting him on what appeared to be even terms throughout a series of competitive and exciting rounds to close the fight.

Davis, a native of Baltimore, rallied in Round 11 after a hot start from Barrios to floor him for the third time in the fight with a left uppercut to the body. After Barrios made it back to his feet, a flurry from Davis along the ropes forced referee Thomas Taylor to jump in at 2:13 of the round.

“I made it tough, I made it tough. I definitely could have made it easier but it is what it is,” Davis said. “I went up two weight classes and I got the job done.”

The reigning 130-pound WBA champion and secondary WBA titleholder at 135 pounds, Davis proved to be the bigger puncher despite giving up nearly six inches in height in his junior welterweight debut, just nine months after recording the knockout of the year in 2020 by finishing Leo Santa Cruz with an uppercut in Round 6 of their junior lightweight bout.

Can’t get enough boxing and MMA? Get the latest in the world of combat sports from two of the best in the business. Subscribe to Morning Kombat with Luke Thomas and Brian Campbell for the best analysis and in-depth news, including instant analysis of Tank Davis’ thrilling knockout of Mario Barrios below.

“It was just adjustments. He is 140 [pounds] and I wanted to catch him with clean shots,” Davis said. “I don’t just want to throw any type of shot. At first I was missing them but eventually I caught up to him.

“I was coming up two weight classes but I knew that if I caught him, I could get him out of there.”

After a strong start from Barrios by using his jab to control distance without over extending himself to be countered, the diminutive Davis made the most important adjustment of the fight in Round 5 when he began to parry at Barrios’ jab with his right glove. The change disarmed Barrios of the shot as he became worried that the quicker Davis would counter him in close.

“I have never been a hater, congrats to Tank. He came in here and did his thing,” Barrios said. “This was nothing short of an exciting fight and that’s what we came here to do. I’ll be back.”

Davis appeared as if he seized momentum for good in Round 8 when a lead right hook surprised Barrios and dropped him hard. Davis followed up to force a second knockdown with the left hand but spent the final two minutes of the round unsuccessfully trying to finish the tough Barrios, which left his gas tank low.

Barrios appeared to hurt Davis with a left hand in Round 9. By the following round, the two fighters routinely traded big shots in the center of the ring as the action only increased.

What made the theater of watching the fight more interesting was that Floyd Mayweather, the promoter and mentor of Davis, twice approached him in the corner between rounds late in the fight to tell Davis he was potentially down on the scorecards in a close fight.
“I knew [Barrios] was hurt. I just had to catch him at the right time,” Davis said. “Floyd came to me and was honest, he told me I was down. He said, ‘Show me that you are great.’ This man set the tone, I’m just following in his footsteps. Floyd, I appreciate you. I’m thankful to be in this position.”

Each time Barrios had big moments as the fight moved into the championship rounds, Davis was able to rally even bigger down the stretch to stun him with a big shot leading up to the stoppage.

“My coach was telling me to go to a jab side but me, I’m southpaw, so I faked like I was going left and threw my hook over the top, that’s how I caught him,” Davis said.

Davis outlanded Barrios by a margin of 96-93, according to CompuBox. Both fighters landed 17 body shots in total, but it was Barrios who used a steady attack of them late to help slow Davis down.

Elsewhere on the card, Erickson Lubin may have secured his rematch with Jermell Charlo by stopping Jeison Rosario with a sixth-round TKO in the co-main event. Lubin, a former junior middleweight title challenger, broke Rosario down to the body before landing the seminal blow to the head and dropping Rosario. A follow-up punch appeared to land with Rosario on the ground, but the referee still called off the fight with Rosario writhing in agony from the body blow. It was the second straight defeat by body shot TKO suffered by Rosario, who was also stopped by Charlo in the same fashion last September.