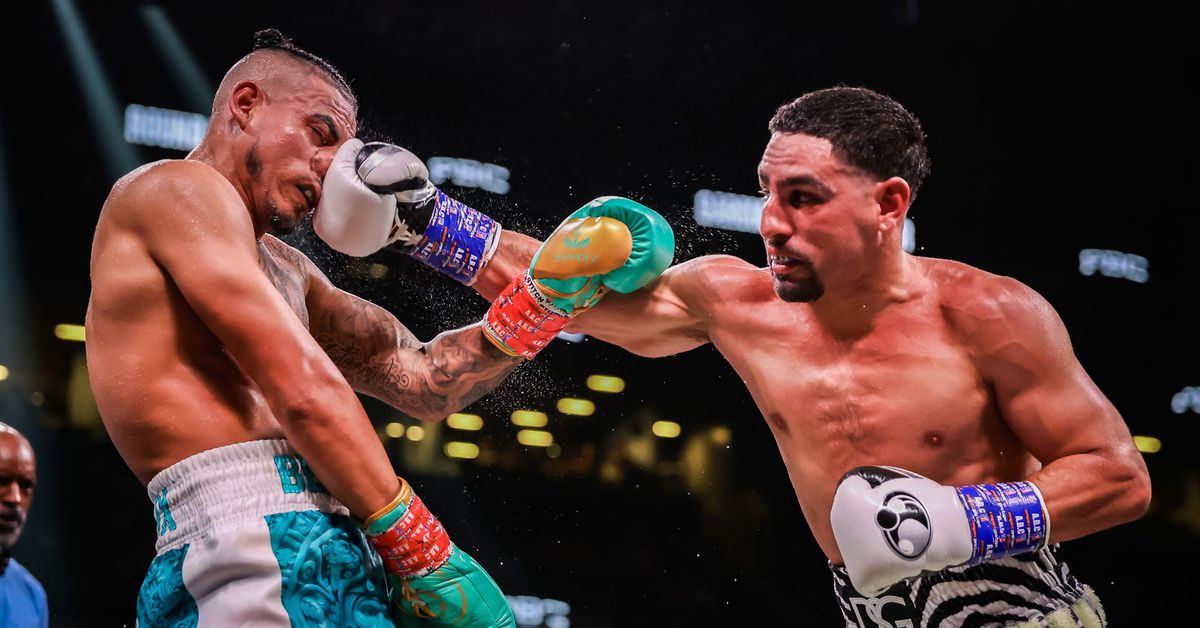 Danny Garcia seemed to deserve a very clear decision victory over Jose Benavidez Jr tonight, and did rightfully get his hand raised, but had to settle for a majority decision thanks to some classic Waleska Roldan scoring.

Garcia (37-3, 21 KO) was making his 154 lb debut with this fight, and while he definitely is small at the weight, he boxed smart, looked fresh, looked like the break from boxing since the end of 2020 really did do him some good, and just outclassed Benavidez (27-2-1, 18 KO) for the most part.

Benavidez just wasn’t able to connect with much of note, though he did stick his tongue out plenty and make a lot of faces, repeating that Garcia wasn’t hurting him, though Garcia kept doing more and winning rounds.

In his post-fight interview, an honest and emotional Garcia talked about some of his battles with mental health in recent times, specifically dealing with anxiety and depression.

“I still battle some days. I still have some dark days, but I try to stay positive. I feel good now,” Garcia said. “My dad was there with me the whole way. I’m nothing without this man. Because of him I’m here.”

His father, Angel, was right at his side, showing support and encouragement for his son. Danny also said that he’s been asked why he went back to boxing, since he’s made good money, and he said, “In order for me to be Danny Garcia again, I had to be back in the ring, do what I love and be a fighter. People ask me, ‘Why do you still fight?’ I love to fight. This is what I love to do.”

“I’m happy with my performance. I think I did a good job,” Benavidez said for his side. “I fought one of the best of the best in his backyard. I honestly felt like I won, but it is what it is. I’m not gonna let this bring me down.”

Despite the trash-talking in the ring and before the fight, Benavidez did show Garcia respect after, and said, “He’s a great person. We had a hell of a fight tonight.” He also said he’d like a rematch.

The big lads brought it, throwing a combined 1,766 punches over just 10 rounds, the second-highest total in heavyweight history of fights recorded by CompuBox.

Demirezen (17-1, 12 KO) came in a slight betting favorite, and everyone who knew both of these fighters knew this was a really risky fight for Kownacki (20-3, 15 KO) to try and bounce back with after two straight losses. He also deserves respect for not taking some pushover can opponent; Demirezen is a former Olympian, he can box a little, and he can fight, period.

Kownacki started well here in the first couple of rounds, but once his pace slowed at all — and again, he had a good pace — it was just not there for him. Demirezen was getting off first, connecting with better shots, and doing damage, even if he’s not a huge puncher or anything.

Kownacki said as much after the fight.

“I think he was getting off first in exchanges. The ring rust, being out for so long, definitely played a part,” he admitted. “Camp was good, but I don’t know, I’ve got to watch it. I wasn’t first, that was a major key. I didn’t get off first, I was trying to counter him.”

Kownacki said he’d have a “long talk” with his wife to see what he wants to do with his career. “I definitely don’t want to go out like this, as a fuckin’ loser,” he said.

Demirezen is a guy who could be in line for any number of fights. He might be able to parlay this into a nice payday with Derek Chisora, or even something like being the guy for Deontay Wilder to come back against. He’s no world-beater or top contender, but he’s credible, and he earned this win.

Not a half an hour after I called Shada Murdaugh a good referee during our live discussion, he went out and made an awful stoppage that pretty much everyone is dumping on. I still think Murdaugh is a good referee, mind you, no ref or anyone is always perfect, but this was a bad stoppage.

Russell (16-0, 16 KO) did score a really good knockdown, but Barthelemy (29-2-1, 15 KO) seemed to be OK enough. That said, being fair, I wasn’t looking right into Rances’ eyes, and Murdaugh was. Barthelemy also didn’t raise his hands, but he may not have heard Murdaugh. Otherwise, he seemed OK, but things do happen.

As far as conspiracy goes, I don’t know, I don’t normally wade in this stuff. That’s what drives you to doing great Twitter photo examination of Yordenis Ugas’ biceps and being certain he’s got a tear or whatever coming into the Pacquiao fight, then you look like Sherlock Dumbass when all is said and done. And it’s not as if PBC have really aggressively promoted Russell at all, honestly, and certainly haven’t made a huge deal out of his stoppage streak. So it all seems odd, but this is two straight fights he’s had with a controversial stoppage. And I do recognize there are more things than just marketing that could, in theory, be in play there.

What also stinks here is that this was a good fight. The 37-year-old Barthelemy was looking lively and solid, had hurt Russell a couple times, was engaging in the fight because his opponent was making him. And for the 26-year-old Russell, it was a very valuable fight because he was getting some frustrating, useful experience in there, and I thought was also responding pretty well.

“It was a good shot, I’m not denying that, but they shouldn’t have stopped the fight,” Barthelemy said. “I got up and told him I’m fine, I’m good to go.”

“This was a very good fight that these fans paid a lot of money to come and see,” Barthelemy trainer Orlando Cuellar said. “How can you take it away from a man who’s on his last leg? He’s been down before and he’s fought on.”

Cuellar demanded, in a fiery speech, that they want the rematch with a different referee. The crowd seemed to respond pretty well, and Cuellar stressed repeatedly that he doesn’t blame the Russell corner at all.

Murdaugh and the New York State Athletic Commission both declined to comment immediately after the fight.