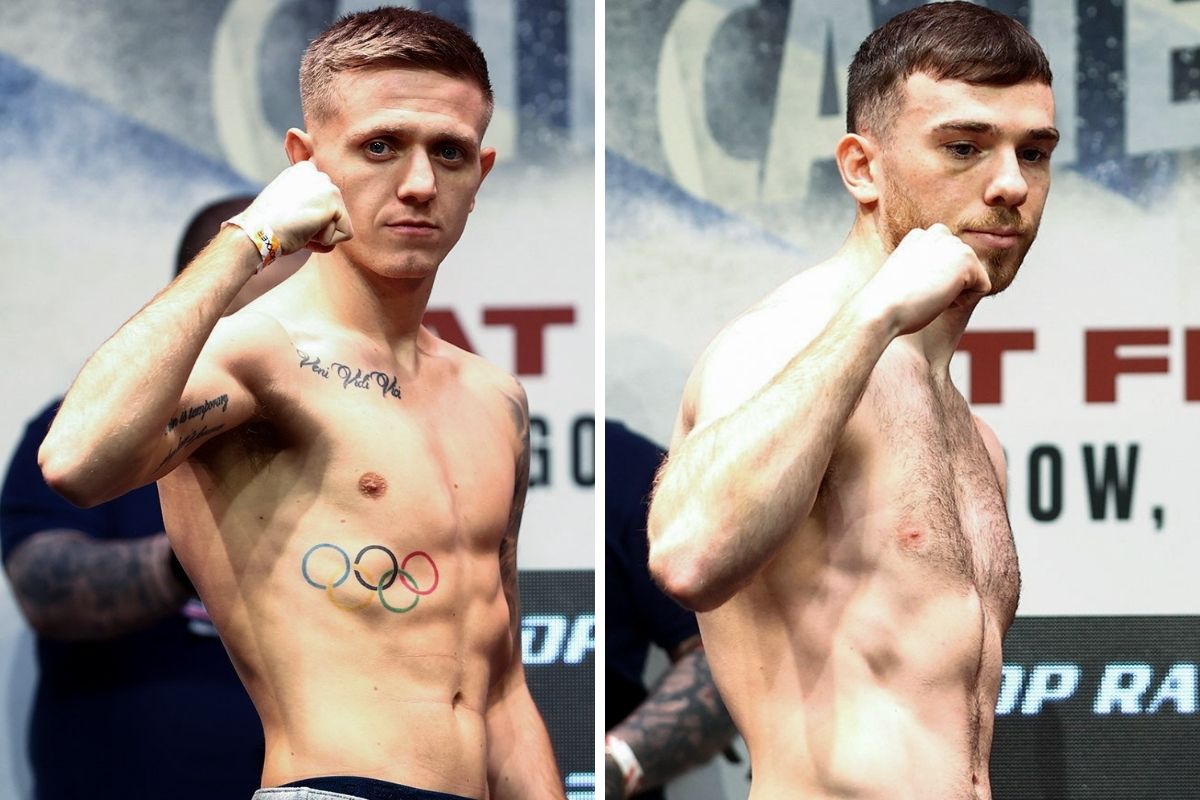 IRISH boxing’s past, present and future will be on show in Glasgow tonight.

Eric Donovan faces the biggest fight of his career to date in the SSE Hydro co-main event against Robeisy Ramirez.

And Paddy Donovan (right) will look to keep up his winning ways when he takes on Miroslav Serban.

Lee, in fact, made his coaching bow when he worked with the other Donovan for a couple of fights in 2017.

And win or lose tonight, ‘Lilywhite Lightning’ is already looking ahead to his own career as a trainer, having started working with amateur prospect Jude Gallagher in the last two years.

But first things first, he is eyeing victory on the Josh Taylor v Jack Catterall card which will see the Scot defend his undisputed world light-welterweight titles against the Englishman.

The pair weighed in yesterday — with each man hitting 9st 5oz — and the Kildare southpaw tweeted afterwards: “It feels amazing to have the support of a whole nation behind me.”

He departed for Scotland with encouragement from his fellow Irish fighters ringing in his ears.

Eric said: “It’s lovely to hear from them all — we really do share a common bond in the pride we have fighting for our country. We all have pride in our team and our fellow soldiers. When one goes to war, we all go to war.

“The boys and girls all know the magnitude of the task ahead. They’re all very much aware that this is a big one. You don’t get any bigger than fighting a two-time Olympic gold medallist.

“I know every one of them, if they could get into the ring and fight with me they would. They know that I have to go out there and face this guy and hopefully do enough to get the victory.

“I know they’re all rooting for me and throwing every punch with me.”
With huge Irish interest on the card, he will have back-up as the first bell approaches.

He added: “They’re all future superstars of the sport.

“What’s really amazing is we’re getting the chance to look at them on the big platforms at the start of their career.

“Once upon a time Irish fighters had to nearly get up to world level before we’d start to see them on the box.

“These guys are getting these platforms early on which is only going to stand to them. And now they’re going to go on to become household names very early on in their careers.

“They’ve a chance now to get a good fanbase and get a good support behind them, bring in good sponsors and partnerships, do really well and make a good life for themselves and their families.

“And when my career is over, I’ll be watching them and following them too. So I’m really looking forward to their careers but also excited to be boxing on the same card as them as well. There’s going to be lots of Irish in the crowd which is going to be fantastic for me.”

Lee moved from successful pro to the corner and Donovan, 36, looks ready to do the same.

He coached Tyrone lad Gallagher to the Ulster senior title last year, losing in the national Elite semi-final, and is confident the youngster has what it takes to make it far in the sport.

Eric added: “Let’s not forget I gave him (Lee) his start as a coach!
“I really enjoy it, I love passing on whatever experience I have — in boxing and in life.

“Jude is a fantastic student. He’s incredible, he’s a joy to work with. He never fusses.

“He reminds me of Katie Taylor, never gives out, just gets on with things.

“Even though he had his disappointments in the Irish there . . . he’d had Covid in the weeks leading up to it, it’s been hard on the kid, but he has an incredible resilience and a character that he just bounces back.

“I was so happy for him to win the Ulster championships and he’s hopefully going to go to the Commonwealth Games now in Birmingham this summer.

“He’s just 20 years old and there’s so much potential in the kid.
“He was down helping me for this fight, he stays down a lot.

“We’re in a different agreement when I’m in camp because I’m training as a boxer and he’s there for company and morale — and being around that environment is also showing.