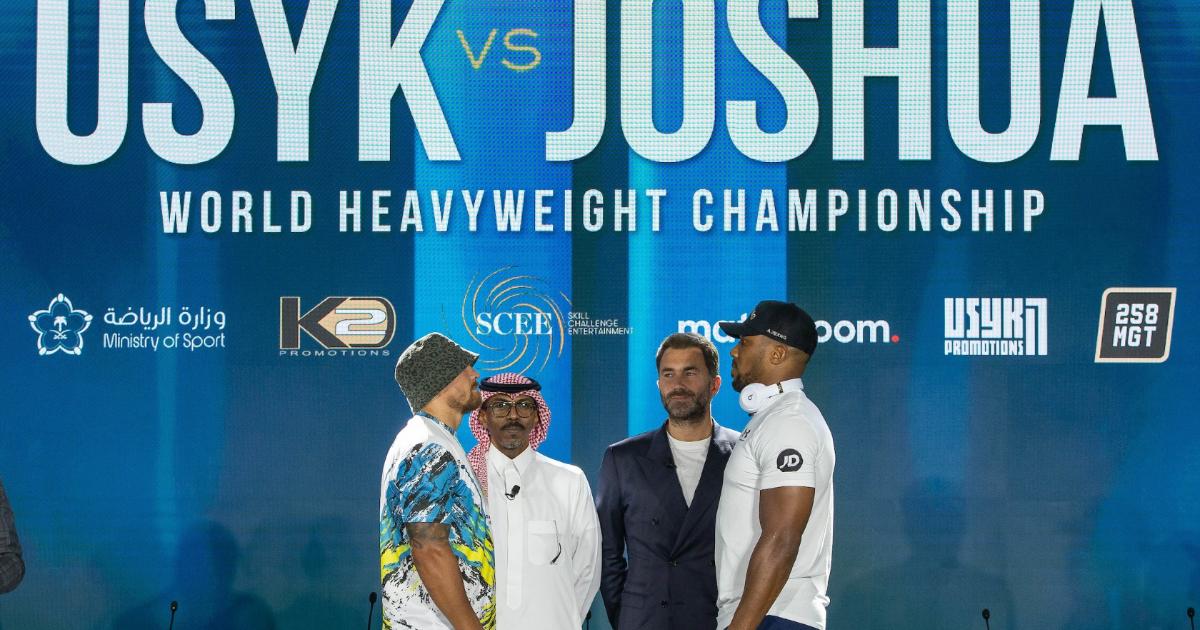 Oleksandr Usyk recently fought to protect Ukraine from Russian aggression. The WBA, IBF, WBO and IBO heavyweight champion took a break from boxing to be a part of something bigger than himself. Now, everyone in his home country will have a chance to watch him represent them in a boxing ring.

Usyk defends his heavyweight titles against Anthony Joshua on August 20. The Ring title will also be on the line. It is a rematch from their September 2021 bout, where Usyk won via unanimous decision. The fight takes place in Jeddah, Saudi Arabia. It will air on DAZN in the U.S. and Sky Sports in the U.K. TV rights for the bout were sold to the Saudi organizers.

For Ukraine, Saudi organizers gifted Usyk the rights to the fight for free. It will be available for those in the Ukraine via Usyk’s YouTube channel, as well as several other platforms.

“He [Usyk] intended to buy, but received it [free] for Ukraine, Usyk’s promoter Alex Krassyuk told talkSPORT. “He makes it free to watch via Megogo [streaming service], his YouTube channel and via state public TV ‘Suspilne’.”

Usyk is also supporting Ukraine by releasing 2,000 NFT’s via Blockasset. Created by Irish artist DOSBRAK, proceeds will be going to the Usyk Foundation.

I am releasing 2,000 pieces of digital art with @blockassetco created by @dosbrak with proceeds supporting the Usyk Foundation.

This is for my country and my people. 🇺🇦

Click on the link in the bio to support now pic.twitter.com/8gKxIAzEqv

“Compared to war, boxing is child’s play… This is for my country and my people,” Usyk stated on Twitter.

Usyk made his boxing debut in 2013, primarily fighting out of Ukraine. He beat Marco Huck, Mairis Briedis, and Murat Gassiev in the World Boxing Super Series cruiserweight tournament to become undisputed cruiserweight champion. In 2019 he made his heavyweight debut. Usyk beat Anthony Joshua in September for the WBA, IBF, WBO, and IBO heavyweight titles.

A few months ago, Usyk joined the Klitschko brothers, Yaroslav Amosov, and Vasiliy Lomachenko, among others, in taking arms against Russia. He has since been able to leave the country to train for his upcoming fight.

This will be Joshua’s second time attempting to reclaim heavyweight gold. Joshua lost to Andy Ruiz Jr. in 2019 for the titles, but won a rematch just a few months later. That bout also took place in Saudi Arabia.

When is Oleksandr Usyk vs. Anthony Joshua 2?

How to watch Oleksandr Usyk vs. Anthony Joshua 2

In most countries globally, including the U.S., Canada and Australia, the fight will be streamed on DAZN.

However, Sky Sports Box Office won the rights to the fight in Joshua’s home territory (U.K.).

In Ukraine, the fight will be available on local TV as well as Usyk’s YouTube channel.

Oleksandr Usyk vs. Anthony Joshua 2 PPV price: How much does the card cost?

In the United States, Canada and Australia, and most territories globally, the fight will air on DAZN, but it will not be via PPV.

Fight fans in the UK will have to stump up £26.95, a £2 increase on the price Sky Sports set for AJ and Usyk’s initial encounter.

As mentioned, in Ukraine, the fight is available for free on local TV and Usyk’s YouTube channel.