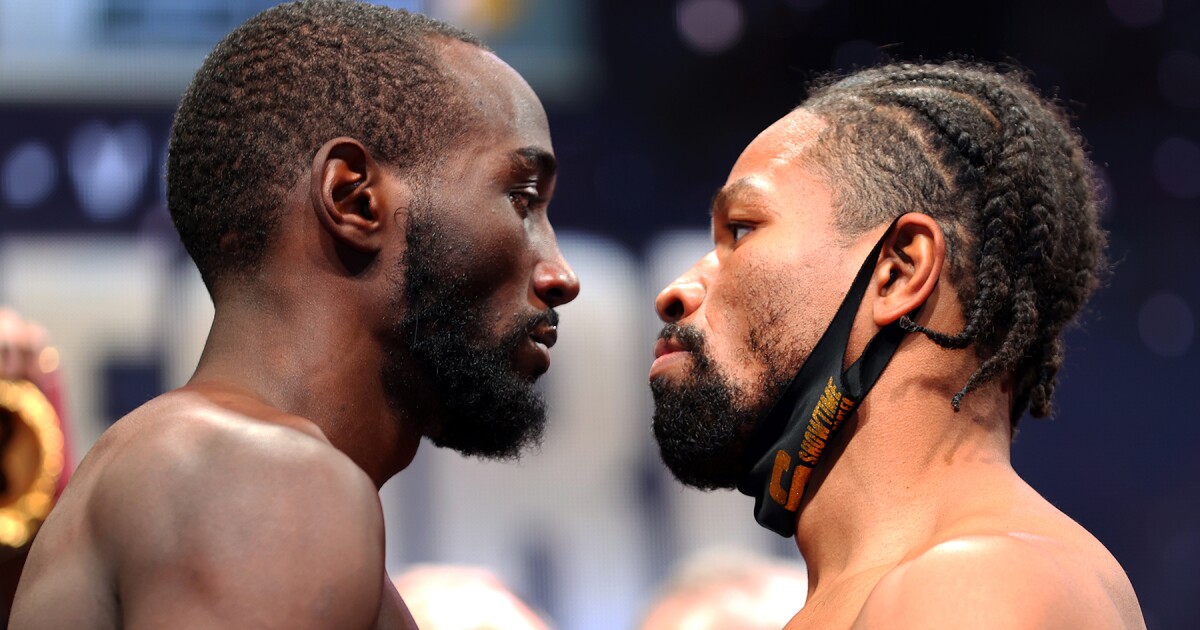 CLEVELAND — Saturday night, Northeast Ohio native Shawn Porter, better known to boxing fans as Showtime, will enter the ring with Terence Crawford to fight for the WBO welterweight championship. The former two-time champion is looking to reclaim the title from Crawford, who is undefeated and making his fifth defense of the title. It’s a match that will define both fighter’s careers in different ways, and for Porter it’s the next test of his endurance and grit as he tries to give Cleveland another championship to celebrate.

Northeast Ohio proud
Don’t call Porter a Cleveland native. Don’t call him an Akron native. He wants to make it clear he represents all of Northeast Ohio. Moving around throughout his childhood, Porter has embraced Cleveland, Akron and the surrounding suburbs all as his home.

“There’s people in Stow Ohio, I graduated from that community, they would say I’m from Stow. There’s people in Akron who knew me to play football, sports, boxing growing up almost my entire life, they would say ‘he’s from Akron.’ And then you get people who know me from Cleveland that say I’m from Cleveland,” Porter said. “I tell them I represent Northeast Ohio. Why? Because I moved around so much growing up.”

Still, Porter is universally known as a Cleveland native. Some of Porter’s fondest memories in Cleveland—memories that helped shaped him into the athlete he is today—consist of riding around the city on the Rapid on the way to sporting events.

“Catching the RTA to school on the West Side, when I lived on the East Side catching the rapid every morning, going through Downtown Cleveland and in the mall down there, it’s just to me, those are the special memories that I have. And of course, you know, taking the Rapid to Cavs games, Indians games, Browns games,” Porter said. “I love this city. It’s just something about Cleveland. I don’t know. But that’s just where my heart is. Home is where the heart is.”

Born to box
Porter has been around boxing his whole life. Although he didn’t do it professionally, Porter’s dad boxed and coached throughout his childhood.

Living with his mother at the time, on weekends Porter would get dropped off, usually at a gym, with his dad in Akron. While they were at the gym, before heading home with his dad, Porter got his first lessons in boxing.

“My dad gets his genius idea to tell myself and my brothers ‘We got a new rule. When you come to the gym, you’re not allowed to sit down.'” Porter said. “And so at the earliest age of about four almost five years old, my dad had me doing the basics and the fundamentals of boxing and a lot of the same stuff that I do to this very day because it’s my foundation.”

After laying down the fundamentals, Porter’s dad helped him take his game to the next level, introducing him to his childhood boxing coach—the late Clint Martin.

“So my dad, even though he trained me my entire life and started me, my dad took me back to Clint Martin, The Godfather, when I first started as well. So it’s a big full circle,” Porter said.

Boxing was in Porter’s blood and felt like something he was simply destined to do.

“I think that for me growing up in the sport, it was always at home. It was just—we did it,” Porter said. “My dad didn’t even ask me if I wanted to compete. We just went from training to, ‘Hey, you’re going to go fight,’ and it’s just always been something that we did.”

Porter dipped his toes in the waters of other sports. really getting invested in football throughout high school, but in the end his football teams weren’t very good and boxing stole his heart.

“Came to my dad just before I graduated high school, I said, ‘I want to turn pro,’ and he says, ‘What are you talking about? You’re going to college?’ I said, ‘No, I want to turn pro and box,” Porter said, recalling that life-changing decision years ago. “That’s basically why I turned pro. I just knew that I will be successful doing it. And I think that along with my competitive drive, is what got me two world championship titles.”

Creating a Hall of Fame-worthy career
Over the years, Porter has established himself as one of the boxers to beat. Defeating talent such as Adrien Broner, Danny García, Andre Berto and Yordenis Ugas, 34-year-old Porter has posted a 31-3-1 record with 17 KOs.

Porter’s three losses came exclusively to former or current champions. He’s fought with the best of them and has held his own every step of the way.

“I don’t think a lot of people understand that every fight’s hard. And so even the fights that I’ve lost, those three fights, a lot of ups and downs through those fights, moments that I’m winning, moments that I don’t know, the judges may feel that I’m losing or whatever the case may be, those fights are extremely hard,” Porter said. “When you are able to last, when you’re able to go the distance with guys and put on great performances, you develop a reputation.”

That reputation for Porter is his pure stamina and grit. He doesn’t quit and gives his all in every second of every fight. Porter says he’s been told he’s an “endless gas tank.”

“I’m known for my aggression and I’m known for my conditioning throughout the course of a match,” Porter said. “I think that in a lot of ways, boxing is just like war and only the strong survive. So I’ve been able to survive and win, and I’m honored to be able to do the things that I’ve done.”

That conditioning and aggression has made for a career full of competitive fights that even in the three losses have come down to close decisions.

Porter’s ability to fight big names and stay a dominant force in the ring against each one of them has started to shape the potential for Porter to fight his way into the International Boxing Hall of Fame—but there’s one fight that will really be a defining factor in that chase for a unforgettable legacy.

Terence Crawford title fight
On Saturday, that one fight will come to fruition.

Porter will enter the ring at the Mandalay Bay Resort in Las Vegas with the undefeated current welterweight title holder Terence Crawford.

“For anyone who doesn’t know, Terence Crawford is literally one of the best fighters in the world right now in any weight class,” Porter said. “He’s got speed, he’s got power, he’s got the reflexes. He can counterpunch, he can move around the ring, he can be aggressive.”

Fighting Crawford will be a challenge, no doubt. But Porter has been preparing for this fight and knows that if he wins, he’ll help solidify himself as one of the best pound for pound boxers in the world while also giving him that push to a Hall of Fame bid.

“The three close losses that I’ve had have been the most competitive fights I’ve had. So, I lean on that experience, I lean on the moments that I did good things and the moments that I did bad things and I try to look for those adjustments, understanding that here’s just another opportunity for me to be great,” Porter said. “It takes me being great to beat Terence Crawford.”

Porter will have his moment to showcase his greatness as he goes head to head with Crawford Saturday night in the pay-per-view brawl.

“I can be great,” Porter said. “It’s moments in certain rounds of every fight that will mean the difference between winning and losing. So I think I’m more than prepared to handle everything physically and mentally against Terence Crawford.”

And when the main card begins and Porter’s fight draws near, Northeast Ohio will be watching. Because, well, it’s Showtime.

To learn more about ordering the PPV fight, click here.

Download the News 5 Cleveland app now for more stories from us, plus alerts on major news, the latest weather forecast, traffic information and much more. Download now on your Apple device here, and your Android device here.

Benavidez Fires Back At Team Canelo: If He’s Not Going To Fight Me He Needs To Vacate The Titles!