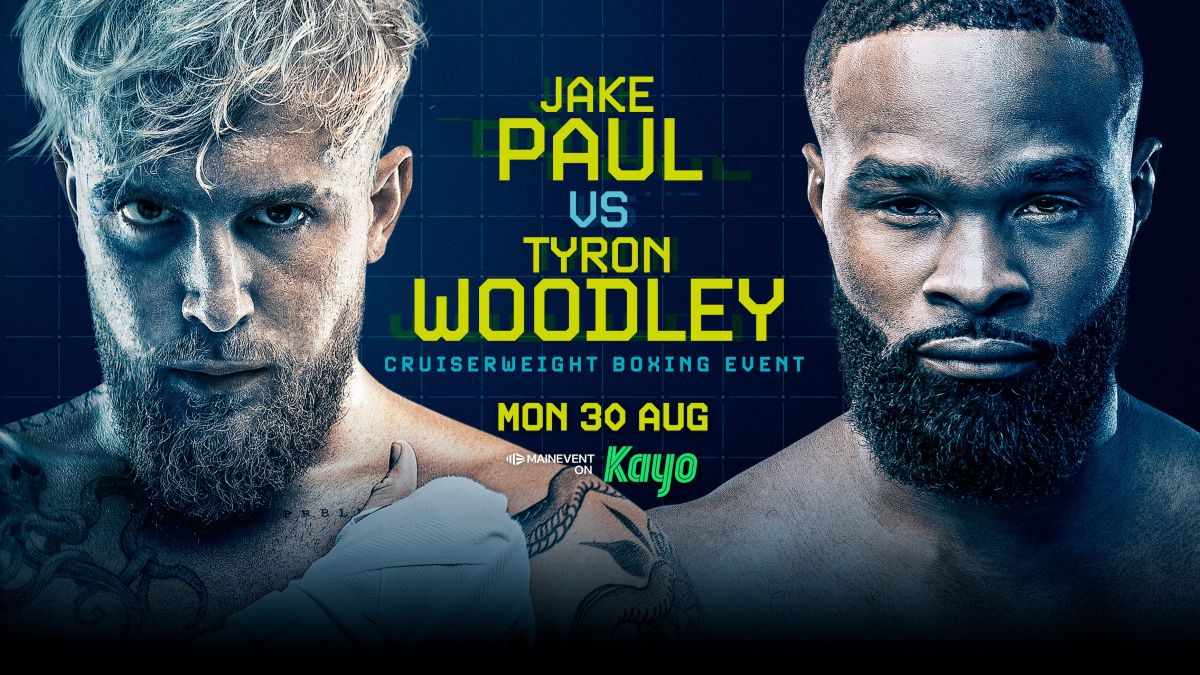 Jake Paul returns to the ring in just a few hours to lock horns with yet another former UFC star. Tyron Woodley will be hoping to do better than fellow UFC fighter Ben Askren, who fell to Paul in the first round this past April. The star-studded exhibition is a $60 pay-per-view in the USA, but it’s less than half that in the UK and Australia. Make sure you know how to watch a cheap Jake Paul vs Tyron Woodley live stream from anywhere in the world.

“He’s quivering and this dude should be, because I’m about to hurt him in a way he’s never felt before,” former UFC champion Tyron Woodley warned YouTuber Jake Paul at weigh-in for tonight’s fight. Paul weighed in at 190lbs, Woodley came in at 189.5lbs

Tyron “The Chosen One” Woodley is in far better shape than Askren, though, so the 39-year-old former UFC welterweight champion should provide a tougher challenge.

“Easiest fight of my career and biggest purse of my career all in one night,” said Woodley. “Basically, they brought me in to take out the trash. Can’t wait to shut this b***h up. This is getting done for the culture, the whole MMA/boxing community, to rid this guy of combat sports.”

A crowd of 20,000 will make their way to the Rocket Mortgage FieldHouse in Jake Paul’s hometown of Cleveland, Ohio, for eight rounds of exhibition boxing. Paul’s last fight featured musical performances from Snoop Dogg, Justin Bieber, Doja Cat and Saweetie, so expect plenty of razzmatazz.

Tonight’s PPV event costs $60 in the US, but it’s less than half that on BT Sport (UK) and Kayo Sports (Australia). Make sure you know how to watch a Jake Paul vs Tyron Woodley live stream from anywhere.

There’s no option to watch Jake Paul vs Tyron Woodley for free, but UK-based MMA fans can stream the big fight for just £17 ($25) via BT Sport Box Office HD.

Going to be outside the UK this weekend? You’ll need to use a VPNto access BT Sport Box Office without being blocked. We recommend ExpressVPN because it comes with a 30-day money-back guarantee and 24/7 customer support.

You can watch online, via Mac or PC, or with the BT Sport Box Office app for iOS and Android. The apps supports Chromecast and Airplay, so you can cast to your TV if needs be.

Paul vs Woodley PPV £17/$25 on BT Sport Box Office
Catch all the action from Sunday night’s exhibition boxing extravaganza at this bargain price from BT Sports. Remember to use a VPN to watch from abroad – UK citizens only, please.

The Jake Paul vs Tyron Woodley ringwalks are expected at 4am on Bank Holiday Monday. No matter if you fall asleep – BT Sport is running repeats from 10am on Monday until 6pm on Friday 3rd September.

Even if you have subscribed to the relevant Jake Paul vs Tyron Woodley rights holders, you won’t be able to use them when outside your own country. The service will know your location based on your IP address, and will automatically block your access.

A Virtual Private Network (VPN) helps you get around this obstacle. A VPN creates a private connection between your device and the internet, such that the servers and services you’re accessing aren’t aware of what you’re doing. All the information passing back and forth is entirely encrypted.

There are many VPN providers out there, with some more reliable and safe than others. As a rule, we’d suggest a paid-for service such as ExpressVPN which offers a 100 per cent risk-free money back guarantee. If you’re not happy with the service any time within the first 30-days, then you can cancel with no penalties at all.

Try ExpressVPN risk-free for 30 days
ExpressVPN hits it for six with a 30-day money back guarantee with its VPN service. You can use it to watch on your mobile, tablet, laptop, TV, games console and more. There’s 24/7 customer support and three months free when you sign-up.

Showtime has the exclusive rights to live stream Jake Paul vs Tyron Woodley in the States but the pay-per-view is more than double what it costs in the UK. Ouch!

If you’re a Brit who happens to be in the US this weekend, there’s no need to pay $60. Simply use a VPN to access BT Sport Box Office as without being blocked, as if you were back home in the UK. We recommend ExpressVPN because it comes with a 30-day money-back guarantee and 24/7 customer support.

The Showtime app is available on a host of devices including Amazon Fire TV, Android TV, Apple TV (4th Gen+), Roku and Xbox One, as well as iOS and Android phones. The action starts at 8pm ET in the States, with the Paul vs Woodley ringwalks expected at 11pm ET on Sunday, 29th August.

Boxing fans in Australia can watch a Jake Paul vs Tyron Woodley live stream on Kayo Sports Main Event, for the very reasonable sum of AU$30 (£16, $24).

Don’t forget to use a VPN is if you are stuck outside of your home country of Australia this weekend. We recommend ExpressVPN because it comes with a 30-day money-back guarantee and 24/7 customer support.

Paul said of former UFC star Woodley: “He’s a good striker. He’s known for knocking people out. But I think when I beat Tyron, people have to put respect on my name.

“But that’s not what I’m here for, to be honest. I already know how good I am. I know that this is going to be another easy fight.

“That’s why Showtime is in business with me. You’re looking at the future of boxing.”