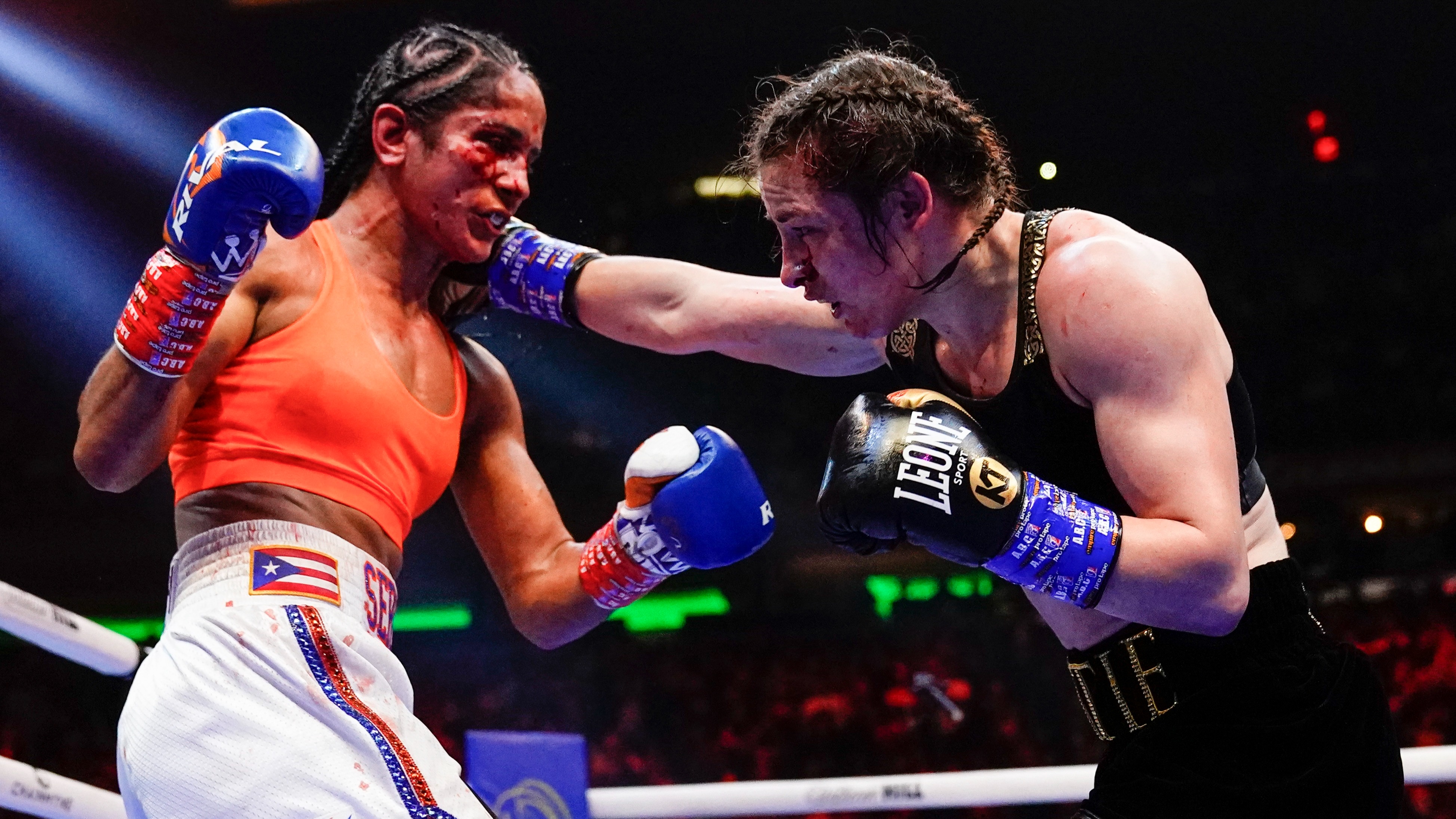 Ireland’s Katie Taylor has retained her status as undisputed lightweight champion after beating Amanda Serrano in boxing‘s biggest female fight of all time.

Taylor, 35, retained her title after prevailing by a wafer-thin split decision in an engrossing and frenetic see-saw battle between two pioneers in the sport.

It was billed as the biggest women’s showdown of all-time at the celebrated venue that staged the ‘Fight of the Century’ between Joe Frazier and Muhammad Ali in March 1971.

Taylor, also an Olympic medallist, soaked up a brutal onslaught in the middle rounds but showed terrific resilience and used every ounce of her experience to finish strongly to keep hold of her WBC, WBA, IBF and WBO titles.

She was given the nod from two judges by scores of 97-93 and 96-93, with a third plumping for her 33-year-old Puerto Rican opponent 96-94, although there were immediate calls for a return showdown.

Taylor, who extended her unbeaten professional record to 21 wins from as many fights, certainly seemed to agree, saying in the ring afterwards to DAZN: “Let’s do it again, Amanda.”

Taylor stands in the ring after winning the historic fight Credit: AP

“I knew going into it I was going to be in the trenches at some stage. She’s a phenomenal fighter, a great, great person,” added Taylor.

“I have the heart to go with the skill and I knew I was going to be able to come through.

Following the win, the women respectfully hugged in the ring as Serrano told Taylor “we did this”.

“They say nobody wants to see women – this place is jam-packed,” Serrano told the crowd.

“Women can sell, women can fight and we put on a hell of a show.”

Serrano seemed to gain the upper hand as she landed some punishing blows to the head and body of her opponent but Taylor refused to buckle.

Taylor took some punishing blows to the face but refused to buckle Credit: AP

The Bray fighter used her movement and counter-punched effectively to finish strongly and while both fighters had their moments in an absorbing final round that thrilled a sell-out 19,187 crowd, Serrano was left to reflect on a first defeat since 2012 and the second of her celebrated 45-fight career.

“She’s undefeated and undisputed, I’m truly honoured to have shared the ring with you,” she told Taylor.

While Serrano was magnanimous in defeat, Jake Paul, the former YouTube star who promotes the multi-weight world champion, tweeted his disgust at the decision, simply saying: “Robbed.”

He later added: “Amanda Serrano out landed Katie Taylor in landed punches both to the body and head.

Scores of boxing champions and celebrities praised the women following the fight – but some remained divided on who should’ve won.

He tweeted: “What a monumental, defining and historic night in boxing. Been enjoying this build up. So happy for and proud of @KatieTaylor @Serranosisters + all the women of boxing

Ryan Garcia, who held the WBC interim lightweight title from January to May 2021, wrote: “I just witnessed one of the best fights ever and in my humble opinion Katie pulled it off”.