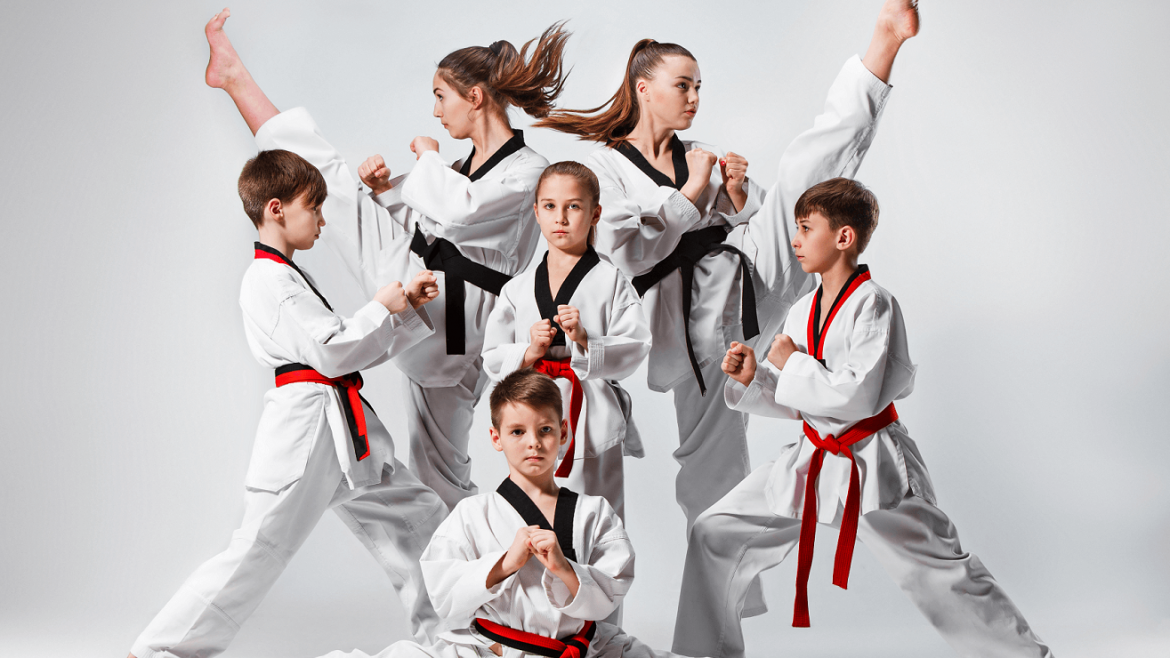 There are many different types of martial arts, including taekwondo, karate, and jiu jitsu, as well as MMA (mixed martial arts). Below are definitions of some of the most popular styles.With this information, the next time someone asks, “What’s the difference between the different types of martial arts?” you’ll have an answer.Aikido: considered a grappling art, aikido is a Japanese martial art performed by flowing with the motion of the attacker rather than opposing it straight-on. This requires much less physical strength, as the practitioner directs the attacker’s momentum with entering and turning motions, followed by various throws or joint locks.Hapkido: a Korean martial art which uses joint locks, kicks, punches, and other striking attacks. Weapons such as sword, nunchaku, rope, cane, and staff are also used, although their emphasis varies. Hapkido focuses on using circular motions, non-resisting movements, and control of the opponent, using footwork and body positioning to gain leverage and avoid strength against strength. Although aikido and hapkido are thought to share a common history, they differ significantly in philosophy, range of responses, and execution of techniques.Judo: a relatively modern Japanese martial art (created in 1882). The goal of judo is to either throw or takedown one’s opponent to the ground and immobilize or subdue them with a grappling maneuver, joint lock, strangle hold, or choke. Strikes and thrusts by hands and feet or weapons are only allowed in pre-arranged forms (kata), and are not allowed in competition or free practice.Jiu Jitsu (Jujitsu, Jujutsu): a Japanese martial art for defeating an armed and armored opponent in which one uses no weapon, or only a short weapon. Practitioners neutralize an enemy with pins, joint locks, and throws by using an attacker’s energy against him, rather than directly opposing it (as with other martial arts such as karate). There are five main areas or arts of training: blocking, fulcrum throw, non-fulcrum throw, escaping, and striking.Karate: a martial art developed in Okinawa, Japan that stresses striking techniques, such as punching, kicking, knee and elbow strikes, and open-handed techniques such as knife-hands (karate chop). In comparison to tae kwon do, karate tends to focus more on hand strikes, whereas tae kwon do emphasizes kicking techniques. The major traditional styles of karate are Shotokan, Shito Ryu, Goju Ryu, and Wado Ryu.Krav Maga: a hand-to-hand combat system developed in Israel that involves wrestling, grappling and striking techniques, mostly known for its extremely efficient and brutal counter-attacks used to keep the practitioner safe and incapacitate the opponent by any means necessary. Generally, there are no rules in krav maga, and it has no sporting federation. In addition, there is no official uniform, although some organizations recognize progress with rank badges, levels, and belts.Kung Fu (Chinese martial arts): a number of fighting styles that have developed over the centuries in China. There are common themes to the various styles (which are usually classified by families, schools, or sects). Some styles include physical exercises that mimic animal movements, while others are inspired by Chinese philosophies, religions, and legends. Internal styles focus mainly on harnessing of qi, while external styles concentrate on improving muscle and cardiovascular fitness. Some of the more common styles include Eagle Claw, Hung Gar, Five Animals (Shaolin Kung Fu), Monkey, Praying Mantis, and Wing Chun. (The term kung fu is often used in the west to refer to Chinese martial arts, however its original meaning refers to one’s expertise in any skill, not just martial arts.)MMA (Mixed Martial Arts): a full contact sport that allows a variety of fighting styles to be used (including martial and non-martial arts techniques). Striking and grappling techniques, either standing or on the ground, are allowed. The early years of the sport saw a wide variety of traditional styles, but as the sport evolved many styles were shown to be ineffective. It is now common for fighters to train in multiple styles, creating a more balanced skill set.Muay Thai: a martial art from Thailand which uses stand-up striking and clinching techniques. It makes prominent use of punches, kicks, elbow strikes, and knee strikes, using eight points of contact, in contrast to the hands and feet (four contact points) more often relied upon in other martial arts. Numerous techniques associated with Muay Thai can be found in MMA.Taekwondo: the Korean art of self-defense, one of the oldest forms of martial arts (reaching back over 2,000 years), and the most widely practiced martial art in the world. Training involves learning a system of blocks, kicks, punches, and open-handed strikes, as well as varying forms of take-downs, throws, and joint locks, all of which develop strength, speed, balance, flexibility, and stamina. Taekwondo is known for its emphasis on kicking techniques, as compared to other martial arts such as karate. In addition to self-defense training, students learn prearranged sequences of techniques known as forms or poomsae (known in other martial arts as kata). Tae kwon do and judo are the only two martial arts included in the Olympic Games.Tai Chi: an internal Chinese martial art practiced for both its defense training and its health benefits. A multitude of training forms exist, including the westernized, standardized version of tai chi (tai chi chih) which has visual similarities to the Chinese tai chi (tai chi chuan), but no martial arts aspect. Some forms are particularly well known because of their slow movement.Are you located in the Buffalo, NY area?We offer a flexible class schedule of after school and weekend classesLocations throughout the Buffalo, NY and Western New York areaIf this sounds like a good match for you, register for our TRIAL PROGRAM which includes classes and a uniform.

Top 10 Best Martial Arts Movies Of All Time Until 2019