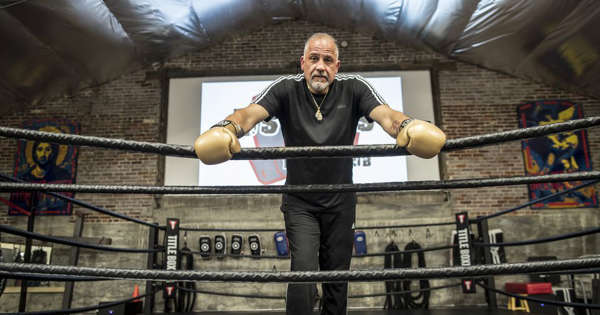 Everyone asks the same question: What did it feel like getting punched by Mike Tyson in his prime?

© Sean Simmers | ssimmers/pennlive.com/TNS Alan Blyweiss, a hard-knock boxer who once went a few sparring rounds with Mike Tyson, says he was struck by the punch of a higher power at a local Christian-themed gym. It changed his life.

Across a 40-year boxing career, Alan Blyweiss’ few sparring rounds with Tyson in the 1980s and early 90s still stand out as his biggest claim to fame. After his own pro career stalled early, Blyweiss entered the sparring circuit, where he ate punches thrown by a who’s who of the sport – everyone from Lennox Lewis to Riddick Bowe.

The Palmyra resident has the rubber nose – devoid of cartilage – plus the Parkinson’s and onset dementia to prove it.

“In amateurs, if you get your nose broken it stops the fight,” explained the 6-foot-one, 220-pound Blyweiss, who at 53 is now training young up-and-comers at a unique gym in Annville, Pa.

“After losing four or five fights for breaking my nose, my dad said, ‘you know what, we’re going to get the cartilage taken out.”

As proof, Blyweiss punches himself, utterly smashing his nose against his face with no detectable damage. This is the unglamorous portrait of a boxer in winter.

Still, Blyweiss always indulges the Tyson-centered questions from starry-eyed amateurs, many in their teens, who flock to the 5 Stones Fight Club for his lessons on footwork and commentaries on character.

Of Tyson, he tells them: “He was the scariest man on the planet. Yeah, he hit like a truck, but so did every other heavyweight. His precision. His speed. His angles. And his explosiveness. That’s what made him the baddest boxer ever. He had the power to put those big heavyweights out. He also had the anger.”

These days, Blyweiss is tapping his brushes with boxing greatness to benefit the Annville gym that doubles as a Christian mission and place of worship. The Baltimore-raised boxer and long-time pain-med addict credits the gym and its punches from a higher power for his redemption.

After reaching out to his many fight world contacts, Blyweiss and 5 Stones CEO Shane Manney have lined up a who’s who of veteran boxing stars to appear this Friday and Saturday at a VIP dinner and 15-card amateur boxing match benefit. Details are here.

Scheduled to appear at both Friday’s dinner and Saturday’s fight card are ‘Irish’ Mickey Ward, Tim Witherspoon, Iran Barkley, Riddick Bowe, Vinny Paz, Vincent Pettway, and Michael Olajide. Tyson is not coming and was never scheduled to appear, his lawyer and publicist say.

Blyweiss is quick to downplay his association with the former champ.

“I never claim that I was in Mike Tyson’s camp as his main training partner,” Blyweiss explained. “I got the ability to be around his training partners and get rounds with Mike because Kevin Rooney was my trainer for a period of time, as well.”

At one point during the camp in late 1984 to early ‘85, Blyweiss received the nod to enter the ring with Tyson.

“I heard Kevin Rooney say, ‘work with him, he’s a kid,’” Blyweiss recounted. “Remember, this guy wins the title at 19 years old and 9 months. These guys were tanks, and they’re the ones I was sparring with every day.”

Untold millions of punches later, Blyweiss is left with a broken body, a hard-knock life and, above all, a cautionary tale for the young people he trains and mentors.

“These kids think it’s so great that I was in with all these legends. But the point that they’re missing is I coulda been that heavyweight champ,” Blyweiss lamented in a Marlon Brando-like “I coulda been a contender” speech ripped from “On the Waterfront.”

“I messed it up because I quit before I put the real hard work in,” he said.

A 17-year-old Blyweiss, boasting an 88-12 amateur record, signed his first and only pro contract for a sweet $75,000 advance. He was going to be promoted as the “Jewish Heavyweight.”

Problem is, he partied, instead of trained.

The spurned promoter locked Blyweiss’ contract, effectively freezing him out of fighting for a living. That’s when he hit the sparring circuit, instead.

Blyweiss regularly checked the classified section of Ring magazine and circled all the boxing camp notices seeking human punching bags. He earned his keep this way for the next two decades. It was a bruising business, to say the least.

“You spar five days a week,” Blyweiss explained. “Camps are anywhere from six to 12 weeks. You get paid a weekly amount, plus a $100-a-round. Back then, I was trying to go six to 10 rounds a day with these guys. You know, you end up just basically their punching bag. Cause if you make a champ look bad, you get kicked out of camp. You throw back; you hit them. But you’re not trying to knock them out.”

Blyweiss took the worst of it, and then some.

In 2017, he was diagnosed with CTE and pugilistic dementia. He’s prone to rage, jealousy and memory loss. He walks with an unsteady gate and is loath to climb so much as a step ladder.

“I have complete frontal and left lobe damage,” Blyweiss said of his brain injuries.

The damage is such that a pacemaker and defibrillator had to be wired into his heart. Not because the pump is bad. Rather, his brain sometimes doesn’t remember to keep it beating.

“My heart is as strong as a 20-year’old’s, but the brain controls the heart,” he said. “I have times when my heart stops because my brain forgets.”

Neck surgery left him with a “Jacob’s ladder” of screws and metal supports between his head and shoulders. Blyweiss endured such constant pain, he spent a seven-year stretch basically on his couch. Along the way, he got hooked on narcotic pain meds and a myriad of other drugs.

He credits his wife, Christine, and their family with helping him through many bouts with relapse and various rage-driven crimes over the years.

The anger that fueled his boxing and almost destroyed his life was planted early by an unlikely source – Blyweiss’ since-deceased adoptive mother.

Among his earliest memories is being slapped in his crib, with the woman he called “Mommy” leaning down and hissing, “You’re not my son.”

Blyweiss said he was born a ‘heroin baby.’ He ended up with an adoptive father who desperately wanted a son and a mother who definitely did not. Any time his dad, who introduced him to boxing at age 7, was out of the house, Blyweiss’ life was hell.

“They are burned-in memories — getting smacked across the head and her whispering, ‘you’re not my son,’ then walking out of the room. And it’s sheer dark,” he recounted. “It started at six months, and it stopped when I could stand up to her.”

Blyweiss made his stand at 13. He grabbed a knife, pressed it to his mother’s neck and threatened to slit her throat. The incident culminated in a 16-hour police stand-off and ended with young Alan maxing out his time in a juvenile reform camp.

“I wanted to kill her, but I couldn’t,” he said “I wanted her to fear, like the fear she put in me as a kid. I went from having a bar mitzva to getting locked up for two years.”

By the time he returned to his adoptive family and to the boxing gym, Blyweiss was impervious to pain, both physical and emotional. This earned him the nickname “the Rock” long before Dwayne Johnson made it famous.

Blyweiss proceeded to be pummeled like one, too, first as an amateur with no nose cartilage, then a pro sparring partner for decades. It only made him more angry.

“I was a monster for a while,” he admitted. “I was facing demons. I was battling health stuff, and I was battling addiction. Doctors had me on pain pills since I was 14.”

Something changed earlier this year when Blyweiss walked into the 5 Stones gym. He had long known Manney, who started the gym years before in his basement. But this was the first time Blyweiss was seeing the gym’s new space, located off East Main Street in Annville.

Upon entering, the boxer who absorbed many punches in plenty of gyms was struck by a blow from a higher power.

It wasn’t just spiritual. The ailing boxer said he experienced an almost instantaneous physical healing, too.

“My life completely turned around physically to the point where the doctors say they don’t know how I’m doing what I’m doing to give back to these kids – and give back to God,” Blyweiss said.

Manney keeps telling his friend to slow down. But Blyweiss insists it’s the blessed environment of the gym that keeps him going.

“I walked in here and my pain went away. I was able to carry a conversation. People started saying, ‘Coach, you look 10 times healthier than when you walked in here’,” Blyweiss said. “This is where I want to be. This is where I need to be. I come here Sunday for church. I get refreshed. And I’m right back to it. That’s a miracle.”

Added Manney: “I think the Lord is really doing something in his life. Literally, the sky’s the limit. The kids love him. He has a wealth of knowledge, and he’s still got the skills.”

Above all, Blyweiss is using his pain-ridden life as the one lesson he hopes lasts long after his students shed their boxing gloves. He’s training them for the fight that is life.

“To see a change in their lives. To see a smile. That’s why I do it,” he said. “That stuff, to me, is better than training and making a world champion.”

Blyweiss sees scraps of his own misbegotten biography in the modern temptations, anxieties and depressions faced by those he teaches. To reach them, he tells his own story — raw, unvarnished, full of mistakes. That’s when they open up to him.

“I know every kids’ story in here. Not by teaching them how to box. By asking questions and sharing my testimony, sharing my story. When you get a smile out of a kid, you get a story out of kid.”

As for preaching “the Word,” Blyweiss admits he was never much for scripture. He demanded proof. These days, he offers his redeemed life as proof.

“I spent my whole life not believing. You learn that on the streets. You learn that as an abused kid,” he said. “But I walked in here, and I felt like the Holy Spirit hit me. So, I ask the kids, ‘how can you not believe in God? You tell me why I’m standing here. You tell me, how. If you can prove anything else different, let me know’.”

That’s the punch Blyweiss says has the power to shake the soul.