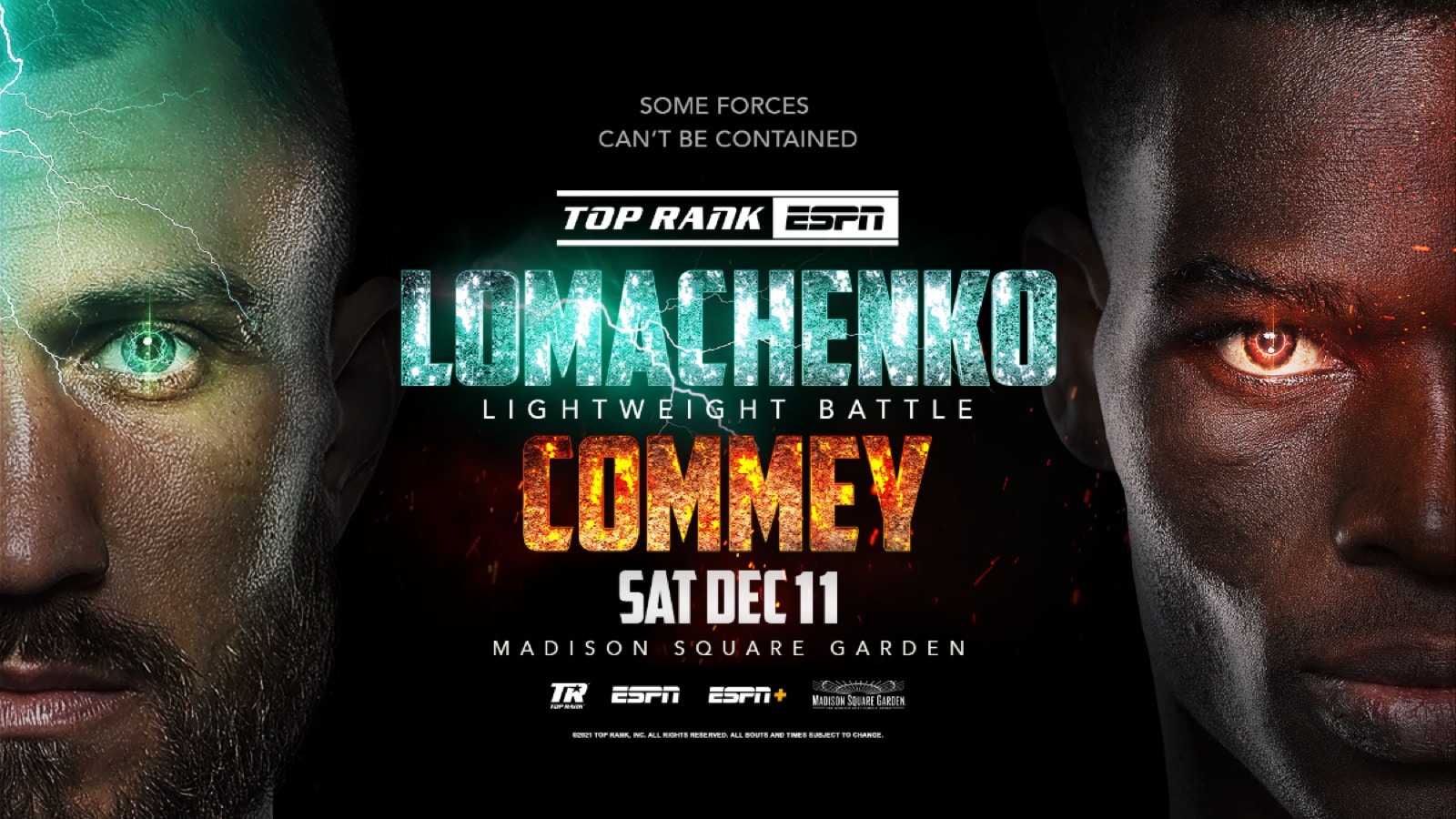 Three-weight kingpin Vasiliy “Loma” Lomachenko, the Ukrainian virtuoso who saves his best for the New York City spotlight, hopes his next oversized challenge is not a bridge too far. Lomachenko returns to Madison Square Garden on Saturday, Dec. 11 for a 12-round lightweight showdown against former world champion Richard “RC” Commey.

Lomachenko-Commey marks boxing’s return to the “Big Room” at Madison Square Garden for the first time in nearly two years, when Terence Crawford defended his welterweight title with a riveting knockout over Egidijus “Mean Machine” Kavaliauskas. In the 10-round co-feature, undefeated heavyweight sensation Jared “The Real Big Baby” Anderson will battle Oleksandr Teslenko.

Promoted by Top Rank, in association with DiBella Entertainment, tickets starting at $56 go on sale, Tuesday, Nov. 2 at 12 p.m. ET and can be purchased by visiting Ticketmaster.com or MSG.com.

“It is only fitting that the great Lomachenko headlines boxing’s highly anticipated return to Madison Square Garden. However, Richard Commey can never be counted out, as he’s a tough fighter who carries huge power in both hands,” said Top Rank chairman Bob Arum. “Jared Anderson is a future heavyweight champion, but I expect Teslenko to be his toughest challenge to date. I also can’t wait to see what Xander and Nico do next, as they are two of the most charismatic and exciting young fighters in the sport.”

Lomachenko (15-2, 11 KOs) has authored many of his most memorable moments under the MSG lights. He’s fought three times at the adjoining Hulu Theater at Madison Square Garden, knocking out Roman Martinez in 2016 to become a two-weight world champion, forcing fellow two-time Olympic gold medalist Guillermo Rigondeaux to quit in 2017, and unifying lightweight world titles in December 2018 with a unanimous decision over Jose Pedraza. Lomachenko had a memorable bout against Jorge Linares at Madison Square Garden in May 2018, becoming a three-weight world champion when he knocked out the Venezuelan star the 10th round with a body shot. He bounced back from his 2020 undisputed lightweight title defeat to Teofimo Lopez with June’s ninth-round stoppage over Japanese stalwart Masayoshi Nakatani.

Lomachenko said, “It is always special when I fight at Madison Square Garden, where so many great moments in my career have taken place. Richard Commey is a former world champion, an opponent I will not underestimate. I expect the best version of Commey, and I will be prepared for whatever he brings on December 11.”

As has become his lightweight custom, Lomachenko will enter the ring as the smaller man. Commey (30-3, 27 KOs) has a nearly two-inch height advantage and 5.5 inches in reach. The New York City resident held the IBF lightweight world title in 2019, but in December of that year, he was stopped in two rounds by Lopez at Madison Square Garden. Commey took nearly 14 months off, returning in February to knock out Jackson Marinez in six rounds. One of the division’s most dangerous punchers, his other two losses have come via split decision to Robert Easter Jr. and Denis Shafikov. The winner of this fight becomes a logical world title challenger in 2022.

Commey said, “I want to thank my team of Michael Amoo-Bediako, Lou DiBella, and Keith Connolly for getting me this opportunity. Ever since the Lopez fight, all I have thought about is becoming a two-time world champion. This fight against Lomachenko will get me one step closer to my goal. I also want to thank Bob Arum and Top Rank for the opportunity to again grace the stage at Madison Square Garden, one of boxing’s most iconic venues. I know that most people consider me the underdog, but I am aiming to prove them all wrong and make Ghana proud once again.”

Anderson (10-0, 10 KOs), from Toledo, Ohio, rose to prominence due to his highlight-reel knockouts and status as heavyweight champion Tyson Fury’s most trusted sparring partner. He has scored three knockouts in 2021 and had his most high-profile assignment Oct. 9 on the Fury-Deontay Wilder III PPV undercard. Anderson opened the PPV telecast with a second-round blitzing over the previously undefeated Vladimir Tereshkin. Teslenko (17-1, 13 KOs), a 6’4, 220-pound prospect from Ukraine, built a 16-0 record before being knocked out in five rounds by Shawndell Winters in December 2019. He rebounded in fine form, knocking out Cesar David Crenz in three rounds in June 2021.

Anderson said, “I’ve made my mark in Las Vegas over the last two years and now it’s time to steal the show in my Madison Square Garden debut on December 11. The Mecca of Boxing holds so much history, and I can’t wait to add my name to list of legends who’ve fought there.”

Zayas (11-0, 8 KOs) can wrap up the 2021 Prospect of the Year award with an impressive showing at Madison Square Garden. The San Juan native is 5-0 in 2021, most recently knocking out Dan Karpency in four rounds on the Jamel Herring-Shakur Stevenson card Oct. 23 in Atlanta.

Ali Walsh (2-0, 2 KOs) turned pro Aug. 14 with a first-round knockout and makes his debut in the building where his grandfather fought some of his most legendary fights, including “The Fight of the Century” against Joe Frazier in 1971 and the 1974 Frazier rematch. Ali Walsh shined alongside Zayas in Atlanta, notching a third-round stoppage over James Westley II.

In order to attend the event, all guests age 12 and older are required to provide proof of COVID-19 vaccination (this means having at least one dose of a COVID-19 vaccine prior to attending). MSG’s comprehensive COVID-19 guidelines, including those regarding children under 12, can be found at https://www.msg.com/madison-square-garden/faqs.

WHEN IS VASILIY LOMACHENKO VS. RICHARD COMMEY?

WHERE IS VASILIY LOMACHENKO VS. RICHARD COMMEY TAKING PLACE?

The fight will be held at the world famous Madison Square Garden in New York City.