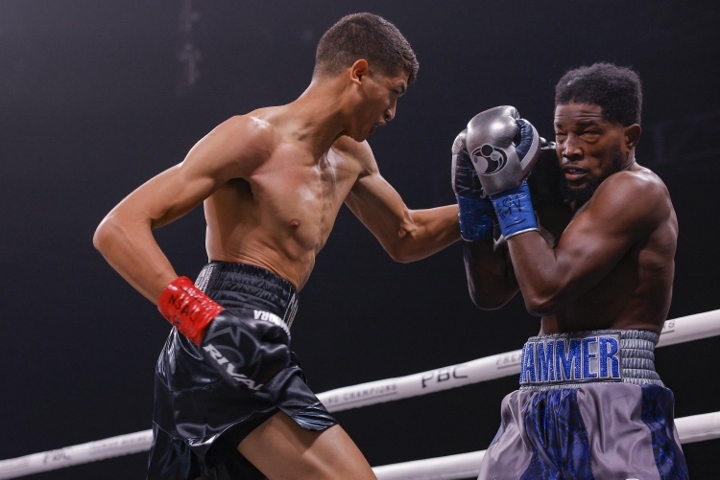 LAS VEGAS – Erickson Lubin luckily didn’t suffer quite as much physical damage as it seemed when he left the ring Saturday night at Virgin Hotels Las Vegas.

BoxingScene.com confirmed Sunday that X-rays at a local hospital early Sunday morning determined Lubin sustained a broken nose and a separated right shoulder during his brutal battle with Sebastian Fundora. Lubin’s shoulder injury will require surgery, whereas he’ll need a lot of time off for his damaged nose to heal properly.

The 26-year-old Lubin did not suffer fractures to either orbital bone, despite severe swelling surrounding both of his eyes. He was not admitted to the hospital and expects to fly home as planned.

Kevin Cunningham, Lubin’s head trainer, instructed referee Russell Mora Jr. to stop his thoroughly entertaining encounter with Fundora as soon as the ninth round ended. The obvious damage to Lubin’s nose and the swelling around his eyes clearly warranted a stoppage, even though Lubin sent Fundora to the canvas for the first time in Fundora’s career late in the seventh round.

Lubin was ahead by the same score, 85-84, according to judges Dave Moretti and Steve Weisfeld when Mora was instructed to stop their scheduled 12-round fight for the WBC interim super welterweight title. Judge Tim Cheatham saw their back-and-forth fight as a draw, 85-85, through nine rounds of what was at least a “Fight of the Year” candidate.

Lubin (24-2, 17 KOs), a southpaw from Orlando, Florida, demonstrated tremendous grit by getting up from a knockdown late in the second round of this “Showtime Championship Boxing” main event.

The 6-foot-6 Fundora dropped him with a perfectly executed right uppercut that badly hurt Lubin, who used the ropes to help himself up. Fundora couldn’t capitalize on hurting Lubin because the bell rang to end the second round before the action could resume.

Lubin came back to win the third and fourth rounds on all three scorecards. The grotesque swelling between Lubin’s eyes became very noticeable during the sixth round.

Fundora (19-0-1, 13 KOs) was having his way with Lubin during the seventh round before a rejuvenated Lubin blasted him with a right-left combination as Fundora backed into the ropes. Lubin landed two more hard left hands, which led to Fundora dropping to one knee.

Fundora spit out his mouthpiece, which led to an extended break and prohibited Lubin from taking full advantage in that sequence.

Like Lubin after his second-round knockdown, Fundora showed real resolve by overcoming that knockdown to fight well during the eighth and ninth rounds. The Coachella, California, native obviously won the ninth round, during which it became clear that a battered Lubin began to fade.

Lubin lost the eighth and ninth rounds on all three scorecards.

Keith Idec is a senior writer/columnist for BoxingScene.com. He can be reached on Twitter @Idecboxing.

Boxing-‘This is not a real fight for me’: Mayweather sees little threat in Paul