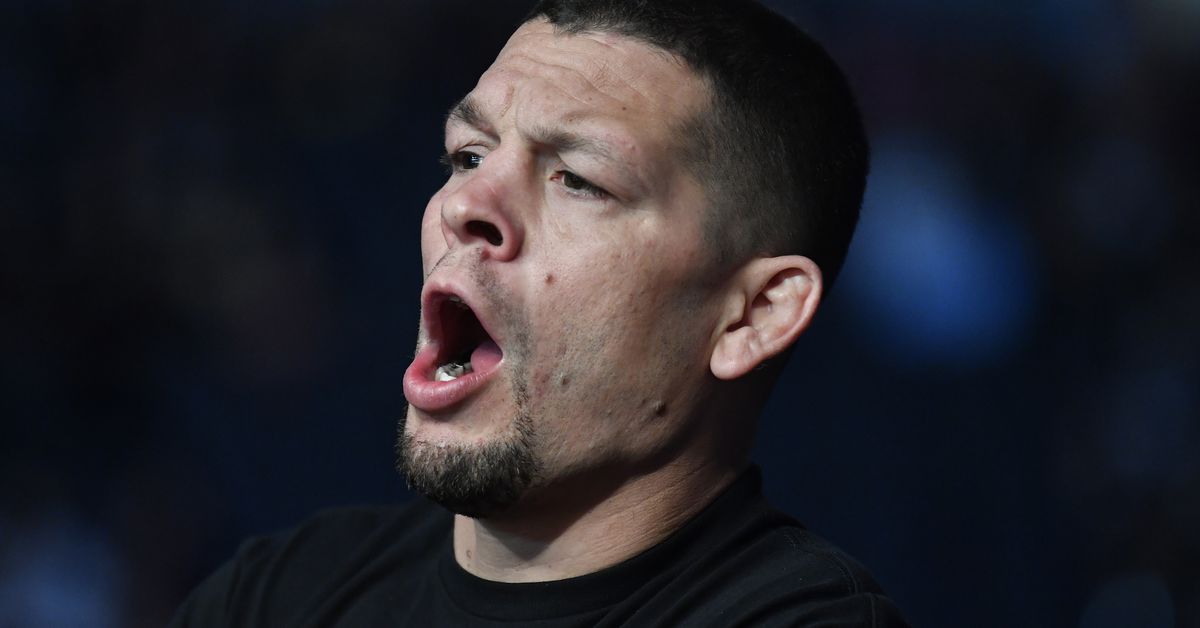 Chael Sonnen knows a thing or two about the art of selling pay-per-views. Throughout his career, many equated the tenacious wrestler to a superstar straight out of the WWE when it came to his mic work. Hell, “The American Gangster” even went on to coin himself as “The Bad Guy” in honor of the late great Hall of Famer Scott Hall.

Unfortunately, not everyone can be a master of the sell whether by words or actions. Still early on in his career as a boxer, Jake Paul has at least been able to back up his words against the opposition provided.

With Paul continually calling out the biggest stars from the MMA world, many in the community believe someone like Nate Diaz would be the most logical of opponents among those with the highest star power. That includes Sonnen who recently pondered the matchup while making a comparison to two of pro wrestling’s all-time biggest names, Dwayne “The Rock” Johnson and “Stone Cold” Steve Austin.

“Nate Diaz and Jake Paul. That is a Rock vs. Stone Cold matchup,” Sonnen said on his YouTube channel. “When you come down to who’s the bigger star, who needs who more? Nate Diaz, of course, one of the biggest stars in all of combat, period. But Jake Paul offers something special. He was a Disney kid. I’m on YouTube, I know the importance to numbers. I know how big his numbers are. He’s gotten into boxing, he has filled up arenas, and I don’t even know what the hell he’s doing and he’s filled up arenas.”

Paul’s last boxing match came in a rematch with Tyron Woodley in Dec. 2021 where the YouTuber scored a sixth-round knockout of the former UFC welterweight champion. The result was about as great of a highlight one could have on their reel and one that erased a rather forgettable outing beforehand.

Originally, Tyson Fury’s younger brother Tommy was to face Paul in Woodley’s spot until injury struck. Even with the animosity and split decision nature of Paul vs. Woodley 1, the rematch reportedly tanked in viewership by only doing 65,000 buys.

“Jake Paul’s last fight was a dud by expectation. I know that because Jake Paul told us,” Sonnen said. “Jake Paul has made some very wild claims but every time they get fact-checked they turn out to be true. You can always trust Jake Paul.

“Jake told us that his last fight did not meet expectations — fine. That’s fine. I put on live events all the time, you’ve got to be used to that. You will do everything the same and one day you will have sold out 5,000 people. You will take that same recipe to a different date, for reasons that you will never understand, there will be 500 people there… What do you do? Well, only time will tell but I can tell you what did happen, they didn’t use him again.”

Immediately following his second victory over Woodley, Paul shared with the media that he was looking to take a bit of a break. Last Friday, Paul revealed on Instagram that he’ll be returning to action in August but no opponent was named.

Meanwhile, Diaz has one fight left on his UFC contract and has continually made things interesting by expressing interest in fighting for Bellator, going as far to ask for his release.

“Now, Jake Paul, smart enough to get in front of this, came out before Showtime and said that he was putting his boxing career on hold,” Sonnen said. “I think it had to do with like promoting or helping train a female teammate of his. He was smart enough to get in front of it. Was that the reality that he said I don’t want to fight? Or did he know that a fight wasn’t coming? I don’t have that answer for you. I can only tell you that as I surmise with the evidence I have in front of me, Jake Paul could really use Nate Diaz right now. Having one bad night isn’t enough to go into absolute panic mode. But having a bad night in the world of pay-per-view, it’s a problem. Not a lot of guys can have a bad night and ever come back from [it].”

Story. Quinn Mulhern shares his story of how a UFC veteran found purpose as an angel of Albuquerque’s streets.

Cut. Ben Rothwell released from the UFC, no longer facing Alexander Gustafsson in May.

Rivalry. Aljamain Sterling expects to be talking ‘a lot of s***’ after Petr Yan rematch.

Miesha Tate on the evolution of women in MMA.

Say what you want about me but nobody has my I.Q in MMA. Had the opportunity to share my knowledge at California State University Northridge.

See beyond the cringe and get your “Training The Elite” out now @dynamicstriking take notes @TheNotoriousMMA pic.twitter.com/uCKbk07qJ5

OSP to the rescue?

With Ben Rothwell out (and subsequently released from UFC), Alexander Gustafsson’s team tells me they want OSP now.

Today? When did you start?

Cheech and Chong get creepy.

It would appear to be Sakakibara season…

I would lose my mind if Sakakibara pulled a Ray Sefo and fought in his own promotion. Didn’t turn out so well for Ray… Thanks for reading, don’t be tricked by any nonsense on April Fool’s Day, and enjoy the weekend!

Will we ever see Jake Paul vs. Nate Diaz?