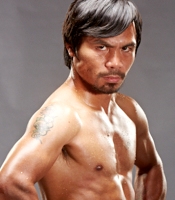 While Muhammad Ali is known as “The Greatest” and the king of the heavyweights, “Sugar” Ray Robinson is widely regarded as the best pound-for-pound fighter of all time. However, if you ask fans and media of a younger generation, their answer to that question is often Floyd “Money” Mayweather, who boasts that he is #TBE (The Best Ever). Tonight, Mayweather’s chief rival, Manny Pacquiao (62-7-2, 39 KOs), is ending a two-year layoff to step through the ropes for the 72nd fight of his 26-year-long career, facing Cuba’s YordenisUgas for the “Super” WBA welterweight title at T-Mobile Arena in Las Vegas, NV, headlining the Fox Sports PBC Pay-Per-View event.

Ugas (26-4, 12 KOs), a 2008 Olympic bronze medalist whodefected from his homeland in 2010 and now lives in Miami, FL, initially captured the “regular” version of the WBA’s 147-pound title with a split decision victory against Abel Ramos on September 6, 2020. He was then elevated to “Super” championby the sanctioning body in January, a move that angeredPacquiao. The Filipino legend won the WBA “Super” welterweight title, himself, on July 20, 2019, via split decision, in an age-defying performance against the previously unbeaten Keith Thurman. After Pacquiao had been inactive for over a year-and-a-half and failed to notify the WBA of his future plans to defend the belt, the sanctioning body named him their “champion-in-recess”. The WBA also denied Pacquiao’s request in May to be reinstated as their full champion.

Following rumors of fights against Mikey Garcia, Connor McGregor, and Ryan Garcia, Pacquiao finally chose perhaps the biggest challenge available in WBC/IBF unified world champion Errol Spence. That decision had many pundits and fans speculating whether a win against the young champion would elevate the Filipino legend to the greatest fighter of all time, surpassing Mayweather.

That narrative quickly changed less than two weeks ago when Spence suffered a torn retina in his left eye on August 9, requiring surgery and forcing his withdrawal from the event. Ugas, who had been scheduled to appear in the card’s co-featured bout versus Fabian Maidana, stepped in as a replacement to keep the event from being canceled. With a new opponent in place, Manny shifted from a +300 underdog to a -300 favorite.

While generally unknown to a widespread audience, the Ismael Salas-trained Ugas is a crafty counterpuncher with a powerful overhand right. He is very much a live underdog and renowned matchmaker, Eric Bottjer, favors him to win a close fight.

“I believe Ugas can beat Pacquiao but, to do so, he needs to keep the fight close. He has the longer reach and won’t be overwhelmed by Pacquiao. This fight will end in a decision. Since moving up to welterweight, Pacquiao has only scored two knockouts, against Miguel Cotto and Lucas Matthysse. I think that, because there are such low expectations of Ugas, if he stays even with Pacquiao, people will get excited about that and give him more credit than what he’s actually accomplishing. The judges sometimes do that as well. If it’s a close fight, I honestly don’t favor Pacquiao. I don’t think Pacquiao gets the decision automatically.”

“Pacquiao hasn’t fought in 25 months and he’s 42 years old. That will certainly play a part in this fight,” continued Bottjer. “While Pacquiao, at 40, fought at a level that I didn’t think he could fight at against Keith Thurman, and his performance was incredible, I don’t think that his reflexes and punch resistance will be the same in the Ugas fight.

“Also, keep in mind that this is the biggest moment of Ugas’ life, while it is just another fight for Manny Pacquiao. If Ugas has the personality to seize the moment, he will win the fight.”

The 42-year-old Filipino Senator, who is heavily rumored to one day run for his country’s presidency, insists that his latest comeback is not motivated by a financial incentive, but rather is about his legacy. He’s already, and has long been, a first-ballot Hall-of-Famer, but the man who turned pro in 1995, fighting in his fourth decade as a professional boxer, wants to be known as the best to ever step into the squared circle.

Though he was already a championship-caliber fighter, it wasn’t until his 35th pro bout that Pacquiao made his American debut, 20 years ago. However, it took his emphatic 2008 victory against the “Golden Boy” Oscar De La Hoya to transcend him from champion to superstar. After the De la Hoya fight came the attention of the mainstream media, the red carpet events, late night talk show appearances and the gaggle of A-listers at ringside.

Over his storied career, Pacquiao has battled seven fighters now enshrined, or voted into, the International Boxing Hall of Fame, in 13 memorable fights, with nine wins, three losses and a draw. Following two knockout losses as a flyweight, Pacquiao won 28 of his next 31 fights, scoring 21 knockouts, while suffering just one loss and two draws.

During that period of 12-plus years, Pacquiao gradually gained 35 pounds of muscle to become boxing’s only eight weight division world champion. For his longtime dominance, the Boxing Writers Association of America (BWAA) voted him as their “Fighter of the Decade” for the 2000s. (Incidentally, Mayweather was named the BWAA’s “Fighter of the Decade” for the 2010s.) To date, he has beaten 22 world champions, won 12 world titles, and has been at the championship level for 23 years.

When discussing Pacquiao’s place in history, boxing historian Don Majeski said, “Analyzing a fighter’s place as an all-time great is a very qualitative thing. Pacquiao will probably get in as a first-ballot Hall-of-Famer unanimously, there’s no doubt about that. In a GOAT discussion, you have to assess his overallrecord. I find that this generation leans too much toward hyperbole. Everybody is considered ‘the best’. If you read reports of fighters from the early to mid-twentieth century, very rarely did historians or sports writers say that they were great. Those considered great were among the most select company. Now, because of television, every fighter gets hyped beyond their true ability and accomplishments.

“Years ago, when fighters won titles in multiple divisions, or any singular division, they had to beat the very best because there was only one champion. You couldn’t say, ‘Oh he beat the WBO champion for the lightweight title and then he beat the WBA champion for the junior welterweight title and then he beat the WBC champion and so on, possibly taking the path of least resistance to do that. For example, Roy Jones Jr. was the heavyweight champion because he beat John Ruiz. He didn’t then say he would fight Klitschko. I believe consideration for greatness is a harder argument these days because there is so much confusion among the multitude of champions. Rarely can today’s boxing fans even recite who the current champions are.

“My top four fighters of all time are Robinson, Sam Langford, Harry Greb, and then Henry Armstrong. Pacquiao is a great fighter, but he hasn’t had a pristine career and he has losses at several weight classes. He has a lot of vulnerabilities. As a welterweight, I don’t think he’s a better fighter than Robinson, Armstrong or Ray Leonard.”

Bottjer argued that, “If Pacquiao had beaten Spence, if he ever does in the future, he would be deserving of a top-10 spot in the all-time rankings. I don’t know if I’ve ever seen a modern fighter from the last 30 years who has the resume of Manny Pacquiao. I was recently reading off the names that Pacquiao has fought in the last 12 years, and it was ridiculous. When fighters like Jessie Vargas and Chris Algieri are your lower level opposition, you’re fighting pretty high caliber boxers. He has fought numerous all-time great fighters.

“I don’t think Manny’s losses to Bradley, Mayweather and Marquez detract from his status as an all-time great. Muhammad Ali lost five fights legitimately and also received a few gift decisions, which doesn’t mean he’s not the greatest heavyweight who ever lived.

Limiting the discussion to just the 21st century, Majeskiacknowledged that Pacquiao deserves a high standing, remarking, “If we’re just talking about this century, I would rate Mayweather, Roy Jones Jr. then Pacquiao as my top three. If Pacquiao were to go on to beat both Spence and Crawford then he is unquestionably a better fighter overall than Mayweather.”

“If we’re talking about just the 21st century, you can put Pacquiao in the top spot as the best, above Mayweather and Roy Jones Jr.,” said Bottjer. “However, Roy is the best fighter that I’ve personally seen live. I believe the Roy Jones Jr. who beat John Ruiz could have beaten any 200-pound fighter in history, including Joe Louis. Pacquiao is just as good. The Pacquiao that beat a prime Miguel Cotto at welterweight could have beaten anybody at that weight, including Henry Armstrong, Ray Robinson and Mayweather. I’m not saying he would have, but he could have beaten those fighters.

In rating the Pac-Man above Mayweather, Bottjer said, “The Mayweather who beat Diego Corrales could have beaten any 130-pounder in history, but he peaked at that point, starting to pick and choose his opponents thereafter. I think he blatantly ducked Pacquiao for a while. I don’t think you can overly criticize Floyd for his record. But ducking Pacquiao as long as he did, and Margarito, says to me that he didn’t want to take risks. Pacquiao took risks. Roy Jones Jr. took risks.”

Tonight, Pacquiao takes another risk, fighting an unheralded yet very formidable opponent to keep his career alive. While he survived the loss to Jeff Horn in 2017, a defeat to Ugas at his advanced age would kill the prospect of mega showdowns against Spence or Crawford. He has hinted at retirement during the build-up for this fight, but a victory allows him to go out on his own terms. Of course, with a win tonight, he’ll also beat his own record and become the oldest fighter ever to win a welterweight world title.