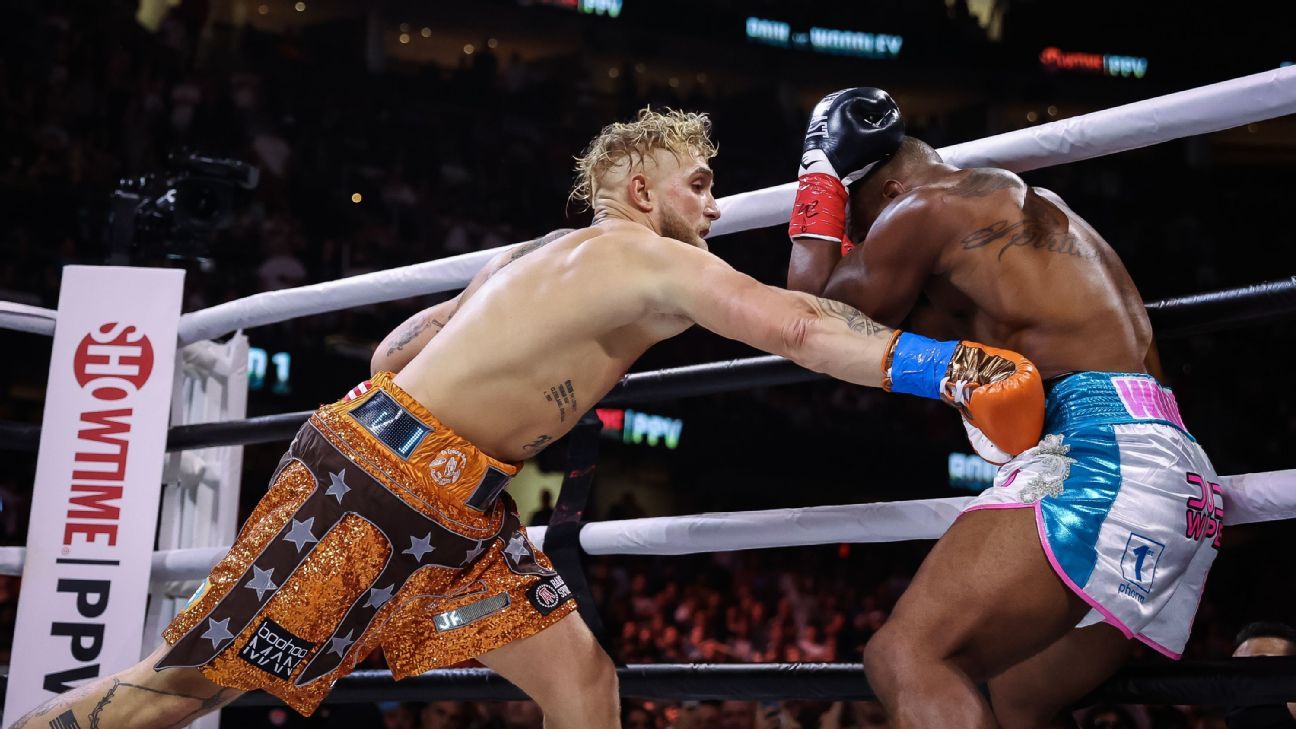 CLEVELAND — Those hoping for Jake Paul‘s boxing demise at the hands of a big puncher will be sorely disappointed.

The YouTube sensation-turned-prizefighter outpointed Tyron Woodley via split decision (77-75, 75-77, 78-74) in the main event of a boxing card Sunday night at Rocket Mortgage Fieldhouse.

Woodley is a former UFC welterweight champion with several highlight-reel knockouts on his MMA résumé. Woodley wobbled Paul with a big right hand in the fourth round, but Paul was able to survive that round and beat Woodley over the rest of the bout.

“I learned a lot tonight,” Paul said in his postfight news conference. “First time going back past four minutes. First time in an eight-round fight. … To be honest, I won convincingly. We’re gonna go back to the drawing board. I think I proved a lot tonight and proved a lot of people wrong.”

After the fight, Paul and Woodley agreed to a rematch if Woodley gets an “I love Jake Paul” tattoo.

“I didn’t hit the ground like his other opponents,” Woodley said. “I walked him down and gave it back. Let’s run it back.”

In his news conference, Woodley felt confident he’d get the rematch if he got the tattoo. However, Paul said he would just consider a rematch with Woodley.

Paul has been a polarizing figure, leveraging his millions of social-media followers into what he is hoping will be a legitimate boxing career. Woodley came in as the more experienced combat sports athlete, with 27 professional MMA fights over a 12-year career. He was also a two-time Division I wrestling All-American at the University of Missouri.

However, this was Woodley’s pro boxing debut. The bout was contested at a catchweight of 190 pounds, the heaviest Woodley has competed at in his combat sports career. Paul (4-0) was facing the toughest test of his burgeoning boxing career Sunday. In his previous bout, the Cleveland-area native knocked out former UFC fighter, MMA champion and Olympic wrestler Ben Askren in the first round.

“I didn’t fight my best tonight,” Paul said. “I give myself a C-minus. It’s my first time fighting in front of a crowd since my first amateur fight.”

“I thought I won, to be honest,” Woodley said. “I was surprised it was a split decision. I thought it was close. … My demeanor and my emotion is because I wanted to knock him out. I had a couple big shots I landed, a couple opportunities and I think I had him hurt and I had him tired a couple times and I didn’t press him. I should have pressed him a little more.”

The early rounds were very close with little action. Paul had his first solid round in the third, landing a nice uppercut-left-hand combination. Woodley’s best moment came in the fourth, when he landed a huge right hand that rocked Paul against the ropes. But Woodley failed to capitalize. He had a solid beginning to the fifth, but Paul stole it late with a left hand at the bell. Paul had a decent sixth and seventh, though both men were tiring, and Woodley had one of his best rounds in the eighth.

“That was the first time I took a real shot with 10-ounce gloves in four fights,” Paul said. “I ate it; it was a good shot. This is boxing. If you’re a mechanic, you’re gonna get dirty. But I proved I have a chin.”

Paul, 24, became one of the catalysts of this new, novelty genre of boxing with his second-round knockout of former NBA slam dunk champion Nate Robinson, in November 2020, on the Mike Tyson vs. Roy Jones Jr. exhibition undercard. Paul has said he vows to be the biggest name in boxing, and he has turned combat sports on its head, headlining big-money events with a fraction of the experience of his boxing peers.

He has a large following with the younger demographic, who have followed him since he was 17 years old on Vine, then YouTube and now TikTok and Instagram. He also starred on the Disney Channel show “Bizaardvark.”

Woodley, 39, lost his last four fights in the UFC and finished up his contract in March with a first-round submission loss to Vicente Luque at UFC 260. He is one of the best welterweight fighters in MMA history, accumulating four title defenses as 170-pound UFC champ and holding the belt from 2016 to 2019. Kamaru Usman defeated Woodley to win the UFC belt in March 2019.

“He’s a tough opponent,” Paul said. “He’s been boxing, striking — whatever you want to call it — for years. I’ve been doing this three years.

“It was a tougher fight than I expected.”

Woodley, from Ferguson, Missouri, was in Askren’s corner against Paul. A verbal confrontation between Woodley and Paul’s team on the evening of that fight in the room where Paul was getting his hands wrapped helped set up this matchup.

More shenanigans followed this week. At the prefight news conference on Thursday, things turned ugly when Woodley accused a member of Paul’s team of talking trash to Woodley’s mother. Woodley tried to get to his mother through a crowded hotel ballroom and traded heated, expletive-laced words with Paul team members as he was held back — as Paul egged the whole thing on.

Things cooled off only once Woodley, his family and team were escorted from the room.

Things boiled over again Saturday at the public weigh-ins at KeyBank State Theatre. Paul was being interviewed following the final stare-down while eating chicken fingers on stage. Woodley then walked over and reached out to give him packets of wet wipes, and Paul slapped them out of Woodley’s hands. He then shoved Woodley away and tried to reach for Woodley’s hat in an effort to duplicate his May “gotcha hat” stunt with Floyd Mayweather.

Woodley moved away and there was pushing and shoving with people on stage before things calmed down.

Usyk vs AJ: Anthony Joshua was under ‘immense pressure’ in training camp for Oleksandr Usyk rematch