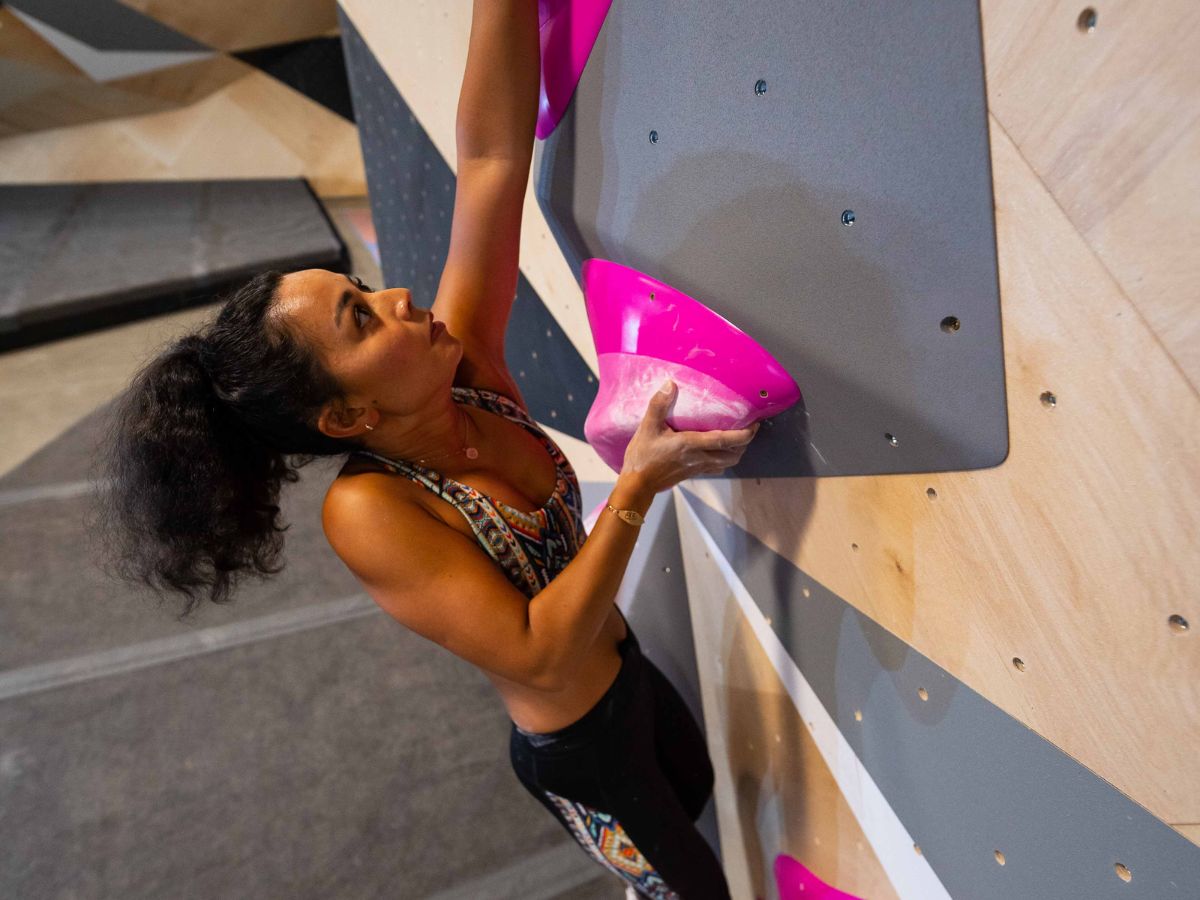 Find out which stores have opened, closed or moved and what’s new in Berkeley’s small-business communities. If you have Berkeley business updates to share, send an email to editors@berkeleyside.org.

Benchmark Climbing bouldering gym wants you to climb the walls

Even the incessant sound of drilling could not dampen Max Krimmer’s enthusiasm for the new Benchmark Climbing gym, which on a recent afternoon soared higher than the North Berkeley facility’s approximately 15-foot climbing walls.

Krimmer, Benchmark’s general manager, was overseeing the finishing touches on the company’s latest bouldering facility, which opened Saturday in the 13,000-square-foot building that formerly housed a Walgreens and took a year to turn into a haven for those who love to scramble. The grand opening events co-hosted by All Rise, which seeks to make climbing more inclusive, featured an all-day climbing fest and competition, music, vendors and food trucks.

Bouldering is an outgrowth of sport-climbing, where climbers who wear harnesses and protective headgear scale straight walls typically 30 to 60 feet high. Bouldering gyms’ lower walls create climbing features that jut into the room at various angles, like massive rock outcroppings.

Both types of climbing have gotten a boost from the popularity of the 2018 film Free Solo about climber Alex Honnold and the debut of sport-climbing at 2020 Tokyo summer Olympics. According to the Climbing Business Journal, 63% of new North American climbing gyms in 2021 were bouldering gyms.

What used to be an Elephant Pharmacy and then a Walgreens is now a bouldering facility. Credit: Joanne Furio

To make their spidery ascent, climbers grasp and step onto brightly colored climbing holds in blob-like shapes that are inserted into the walls’ pegboard surface. Because bouldering walls are lower than sport-climbing ones, climbers don’t need any gear besides chalk and climbing shoes. When they reach their climb’s apex, depending on their skill level, climbers can jump off and onto a deeply padded surface that surrounds each feature or use large, easy-to-grip holds to get back to the ground.

Even bouldering gyms have an aesthetic. Benchmark’s “signature look,” Krimmer said, is inspired by the folds of origami. The gym’s four climbing features, created by Vertical Solutions of Salt Lake City, are finished with a veneer of natural birchwood, as well as black, gray and white-painted and textured birchwood. The space was designed by Berkeley’s Stromberg Architecture and the so-called “problems,” a.k.a. climbs, were configured by three route setters, ​​Mark Heal, Alex Hocevar-Smith and Zoe Jackson.

“We spend a lot of time focusing on the design of our climbing walls,” Krimmer said. “All the walls are designed by climbers, which really sets us apart. We put a lot of thought into the floor plan and the layout, too.”

Benchmark opened with 56 climbs (specific to its grand-opening competition) but will grow to have an average of 180 different climbs. Climbs will be changed out in a seven-week rotation, Krimmer said, to keep things fresh.

Passers-by check out the interiors of the new Benchmark Climbing in North Berkeley. Credit: Joanne Furio

In addition to offering “high-end climbing,” Benchmark seeks to distinguish itself by becoming a community gathering space. So the center climbing feature includes an arrangement of ledges intended as a gathering spot for groups or classes.

Along the building’s Shattuck Avenue side, tables and chairs are set up as co-working spaces. Some climbers like to work and then take breaks by climbing, Krimmer said, and promised “great Wi-Fi” to accommodate them.

A swath of the building’s south side contains a strength-training area and a retail store where climbers can buy drinks, snacks and Benchmark clothing, and rent climbing shoes.

Berkeley’s Benchmark is the second in the Bay Area, joining a Tender Nob location in San Francisco that opened in 2021. Huan Le, who’s lived in Berkeley for 17 years, is the company’s majority owner.

Le hadn’t thought about a Berkeley location until he noticed the building that had been an Elephant Pharmacy and then a Walgreens sitting vacant for around a year-and-a-half. Benchmark took over Walgreens’ long-term lease.

Le said most of the initial memberships came from those who live within a six-block radius. “That’s a dream come true, right? To be rooted in your own community and have a business that contributes to your friends and neighbors,” he said. “It’s wonderful. It’s people you see in the grocery store and every day. … They’re not all students.”

Monthly rates range from $80 for a core membership to $130 for an unlimited plan. Discounts for youth, students and those with economic hardships are also available, along with $30 day passes.

“We want the space to be for everybody regardless of what your goals are and what you’re looking for,” Krimmer said. “Our mission is to give every climber the best tools, the best resources so they can build a lifelong relationship with the sport and continue to progress.”

In the spotlight Lorin District

Berkeley’s nonprofit Alliance Française was formed in 1962 by several East Bay women, joining a network of alliances that promote the study of the French language and Francophile culture around the world. Each alliance works independently and has its own agenda. And in Berkeley, that agenda is about to change under the leadership of a new director, Myriam Da Silva, who joined the organization Aug. 22.

“We are really focused on developing the cultural center and being more active in the community,” said Da Silva. “We’re trying to create bridges with the community and we will do that through arts and events, conferences with guest speakers and a new art gallery. We want to be known as not only a language center but a cultural center that wants to attract people who are not French speakers.”

The newly opened art gallery was the former garage for the 1903 Craftsman house the Alliance calls home. On display through Jan. 27 is the work of Québécois photographer Fred Aube, a Montreal native who lives in San Francisco. (Admission is free.) Other upcoming events include a 60th anniversary celebration with a 1960s theme from 3 to 7 p.m. on Nov. 6 and a French Market from noon-3 p.m. on Dec. 3.

Da Silva, a native of Lyon, moved to the Bay Area 10 years ago, working as a French teacher at the College Preparatory School and former Mills College, both in Oakland, and as the academic head of a Bay Area nonprofit. Previously, she worked for an AF in Mexico, where “they were very big on events,” she said. “That’s why the board recruited me.”

In the future, Da Silva hopes that the AF events will attract Francophone communities from Africa and Haiti that live in the Bay Area. She’s also open to new programming ideas. What about … French fashion?

After being in business for 42 years and training hundreds of students — some as young as 2 — in Kuk Sool Won, a traditional Korean martial art, Berkeley Martial Arts held its last class on Saturday, Oct. 3. The reason?

“I’ve been losing a lot of money over the last two-and-a-half years trying to keep it open. I had 100-some students and maybe a dozen of them came back,” he said. “I can spend three or four years rebuilding, but then I’m going to retire anyway. I decided it was time to call it a day.”

The last class at Berkeley Martial Arts was followed by a barbecue and potluck lunch on Saturday, Oct. 29. Credit: Joanne Furio

The school got its start after In Hyuk Suh, the tradition’s grandmaster and founder, came to San Francisco in 1974, drumming up interest in the tradition. Suh’s brother opened the Berkeley school in 1980 and ran it for a while, followed by another Suh protege from Korea. Brewer was also a student at the school, starting in 1983, before becoming the owner.

Because the school still has a core of about a dozen black belts who still want to learn, Brewer is looking for a park where they can practice.

Laura Fierro’s 13-year-old daughter, Victoria, is one of those black belts. The teenager’s been studying with Brewer for five years. Fierro also owns the Kidsland Berkeley location on Haskell Street and started taking her 2- to 5-year-olds to the martial arts academy starting in 2018, which came to a stop during the pandemic.

“He teaches respect, first of all, and sharing, working as a team. All of those values are very important for the kids,” she said. “It was a fabulous community service he was providing.”

A Wells Fargo bank branch closes — this time for good

A previous closing turned out to be a harbinger: Wells Fargo’s branch at 1095 University Ave. (at San Pablo Avenue) will be closing — this time permanently — on Jan. 11.

Previously, the bank said it had a problem finding staff. Now the popularity of online banking, which accelerated during the pandemic, is the culprit.

“The changes reflect customer trends — including the way our customers increasingly use digital tools for transactions such as check deposits,” said spokesperson Edith R. Robles.

Customers with safe deposit boxes have until Jan. 11 to clear them out. No appointment needed.

Nationally, bank closings are up, a trend that more than doubled during the pandemic, according to a study by the National Community Reinvestment Coalition, an association of more than 600 community-based organizations that seeks to increase the flow of private capital into underserved communities. More than 4,000 branches shuttered since March 2020, the study found.

The NCRC also discovered that a third of bank closings from 2017 to 2021 were in low- to  moderate-income and minority neighborhoods, like the one this Wells Fargo serves.

Hans Reinhardt, who owns Alpha Design Custom Furniture at the southeast corner of that intersection, 2001 San Pablo Ave., was concerned about the exodus, including the closing of the nearby 99 Cents Store.

“When businesses close, that brings less people to the area,” he said.