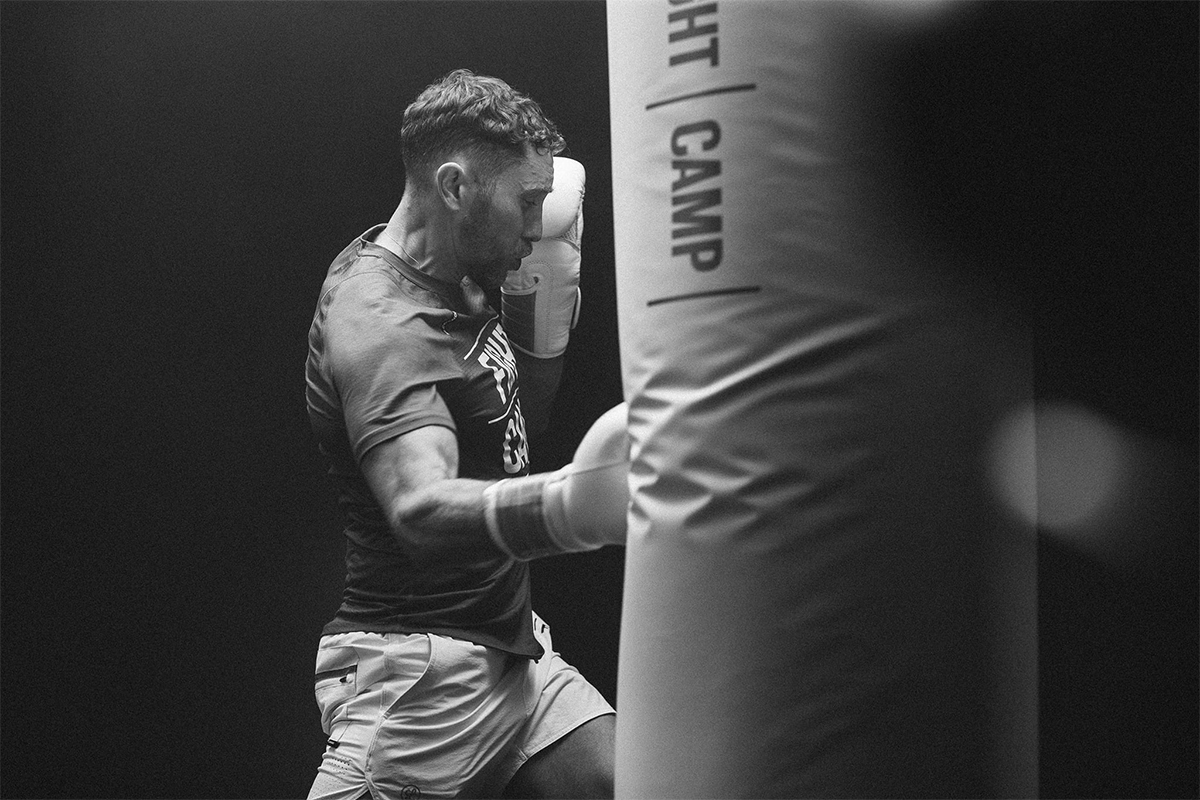 The last time I boxed was in a Nolita basement with 30 people I didn’t know. It must’ve been the usual Wednesday crowd — a bunch of them had pre-established sparring partners and a few flirted with the instructor as he tied his hair. I took a bag in the back, determined to not embarrass myself.

What followed was a typical ClassPass cliche; I made some mistakes, made some friends, and left sweaty and ready for dinner. I didn’t have a heavy bag at home, and it would never occur to me to join a real gym with real fighters, so for the moment, that was that. Short of shadowboxing, the primary way for me to get better would be to keep showing up for classes.

The pandemic had different ideas. I’ve spent the last two years running, cycling and lifting. That’s how I stay in shape. There have been deviations to that cadence — some yoga here, some soccer there — but my bread and butter is a balance of endurance and strength training.

Less than a week into 2022, though, I can happily report I’m permanently adding boxing to that mix. That’s thanks to FightCamp, a connected fitness apparatus that’s streamlined the studio experience for at-home workouts. The brand has been around for a minute (it launched back in 2016), but had a huge 2021, raising $90 million from the likes of Floyd Mayweather and Usher.

Many, including me, have been quick to point out that connected fitness lost some ground on the back nine of last year. For all the flashy funding that brands like FightCamp, Peloton and Ergatta have attracted, online resale markets indicate that many consumers are now bored or uninspired by the expensive equipment they purchased when gyms first closed.

That said, it’s hard to imagine losing interest in FightCamp: of the dozen-plus connected fitness platforms currently vying for space in your basement and a recurring subscription fee from your debit card, I would rank the experience I’ve had boxing with FightCamp at the very top.

Why? Because it’s as fun as the at-home workout medium gets. I’ll always be more Rumble than Rocky. That goes for most of us. We don’t necessarily want to be boxers; but we do want to box. Hitting a bag at the end of a day is undeniably satisfying. Having expert trainers on hand and a seemingly endless library of workouts that coach you through power punches and left hooks from the privacy of your own home is game-changing.

Some basics: the most affordable FightCamp unit costs $1,219, but with their current New Year offer, it’s down to $999. That’ll bring home the free-standing bag, wraps, a pair of 12 or 16 ounce gloves and a bag ring, meant to keep it from sliding around during your workout. The package also comes with “punch trackers,” which sync via Bluetooth to an app on your phone. They’re USB-chargeable, and you pop them into small pouches in each wrap, from where they’re able to catalogue every single punch you throw and feed that information directly to you user profile.

(The most common question I’ve gotten from friends and family is whether the bag itself has punch-reading software. It does not. It’s a normal bag, filled with four 75-pound bags of sand. The technology all stems from the trackers.)

You can sense the years of R&D that got FightCamp to this point. Connected bikes, treadmills, rowers and even climbers have analogs in American gyms; engineers just needed to add a larger screen and a social network. But the original “punch tracker” in most boxing workouts was whatever trainer was holding onto the other side of the bag, screaming out directions or encouragement. Boxing and connected fitness don’t feel like natural bedfellows for that reason. Everyone knows how to strap into a bike or rower. But how many non-boxers can float around a bag for a half hour and put together a coherent session/not break a hand?

Fortunately, the gamble paid off. The punch trackers are aces. They don’t miss a blow (or “bomb,” as trainer and co-founder Tommy Duquette likes to call them), and as a trainee, punching your way through even your first few classes isn’t as intimidating as you’d expect. I recommend taking a “Pure Punching Workout” at first, before you get into get into the more advanced fare. Keep it to four rounds. Each class has between four and 10; a round takes four minutes, with up to a minute of “coasting” (one-two’ing the bag) and a minute of rest.

Duquette is a former U.S. boxing team member. The rest of the panel is similarly decorated: there are MMA competitors, kickboxing champions and dancing instructors teaching these sessions. I’ve found the format keeps them from either A) going into too much exposition before a round or B) diving in before you’ve even gotten a chance to velcro your mitts. They’ll introduce a basic combo — cross, jab, slip right, cross — and you’ll have a few moments to watch them do it and try it out yourself. Then the round’s started, and you have a punch goal to hit (usually somewhere between 150 and 200). At the end of each round, and at the end of a workout, your punching totals are compared to the average FightCamp user and added to your all-time total.

A few things to keep in mind? FightCamp doesn’t come with a screen. I’ve used it just fine with my phone propped up on a shelf, but if you have Airplay capabilities (and enough space to set the unit up near a TV — just keep in mind that once it’s in, it’s really hard to move), I’d recommend getting your trainers onto a larger screen. It can only help for deciphering their movements, and you’ll spend less time hunched over when you should be ideally be finding your flow state and dancing around the bag.

As for the user experience, all credit for letting trainees listen to their own music during a class. Your Spotify favorites easily interlay with the trainer’s spiel, and you can isolate the volume for either accordingly. Also great: the filtering interface, which allows you to separate by round length, trainer and discipline (boxing, kickboxing, shadowboxing or more conventional bodyweight workouts). Also, Duquette relayed in a session earlier this week that 70% of FightCamp users do not follow their boxing class with five minutes of ab work. Be the 30%!

The monthly subscription, $39, will keep many from making the final leap here, and that’s understandable. But keep in mind that most boxing classes at the Instagram-friendly gyms charge about the same per class. And if you’re looking for a personal coach, you’re paying twice that (at least) per meeting. I truly don’t want to discourage people from visiting gyms, especially as they’re getting hit hard right now, during their most important weeks of the year. But it’s worth noting that you could take 12 classes a month on FightCamp and see pretty rapid improvement in the sport without waiting until the next time the spirit moves you to show up for a class — at which point you’re still learning on the fly.

And if you can stomach the initial sticker shock, it’s also worth noting that FightCamp doesn’t have to be (and perhaps shouldn’t be) your primary form of exercise. My lats are killing me from all those lefty lead hooks. My core and lower half are still recovering from a “ladder coasting” drill. Boxing is about as full body as it gets. Two to three sessions per week is more than enough, and for me — mister runner-cycler-lifter guy — it represents a delightful bout of cross-training.

Fitness should be fun. I’ll write it as many times as I have to. If an activity doesn’t speak to you, you don’t have to force it. There are so many ways to move your body. Boxing happens to be one of them, and FightCamp has figured out how to bring the sport, or as much of it as possible, to your home. Who knows? Beat up on your bag enough, and maybe you’ll want to be a boxer after all. Mike Tyson likes the thing, after all. Much has been made of January 17th, the day that everyone supposedly ditches their New Year’s resolutions for good. I fully expect to still be boxing January 17, 2023.

Oh, and, to get a feel for what FightCamp workouts feel like before making a purchase, try out one of their free, 15-minute, no-equipment sessions here.

This article was featured in the InsideHook newsletter. Sign up now.

Will Floyd allow Tank Davis to fight Lomachenko in 2022?