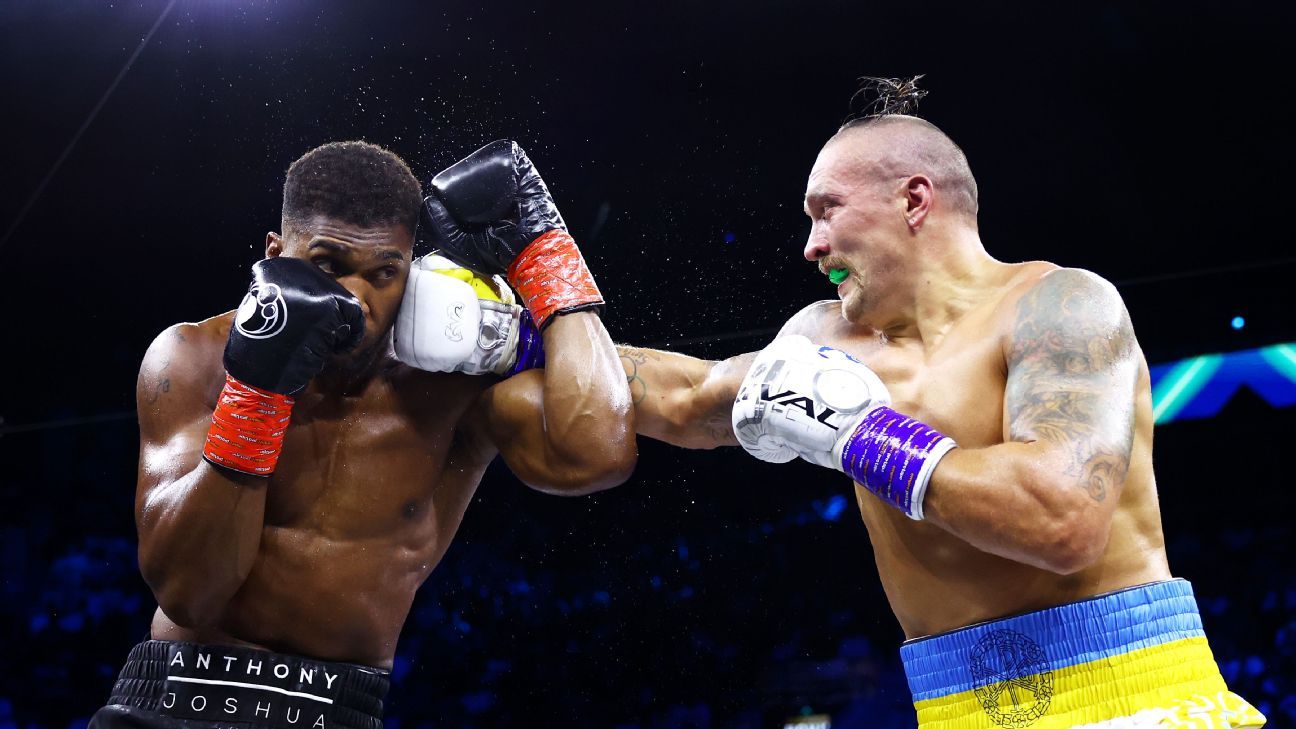 Oleksandr Usyk retained his three heavyweight titles with a split-decision victory over Anthony Joshua in a rematch on Saturday in Jeddah, Saudi Arabia.

Joshua, who entered the ring as champion when the two met in September in London, fared far better in the return bout under the guidance of new trainer Robert Garcia, but it still wasn’t enough.

“This guy here is a phenomenal talent,” Joshua said.

Usyk, 35, kept his WBA, WBO and IBF belts with a second victory over Joshua and is on a collision course with Tyson Fury — who holds the WBC belt — for the undisputed heavyweight championship.

The proposed Usyk-Fury matchup, one the Kingdom of Saudi Arabia has eyed for December, is one of the biggest in all of boxing. Fury claimed he was retired following an April victory over Dillian Whyte, only to announce a comeback earlier this month. After talks with Derek Chisora stalled, Fury reversed course and insisted again that he was retired.

“I will annihilate both of them on the same night,” Fury said in a video posted on Instagram after Usyk’s victory Saturday. “Get your f—ing checkbook out because ‘The Gypsy King’ is here to stay forever!”

“Won’t be a hard fight to make,” Arum said. “I spoke to [Usyk’s manager] Egis [Klimas] to congratulate him. We should be able to put it together. The only question is where to put it.”

While Fury waffled on his future, Usyk was preparing for the rematch with Joshua in Dubai the United Arab Emirates after he left war-torn Ukraine with his wife and three children. Usyk originally joined a territory defense battalion when Russia invaded Ukraine in February.

In the lead-up, Usyk said he was “motivated by the people of Ukraine who are struggling hard to defend our independence” and ensured the Joshua fight was available on free-to-air TV back home.

“I want to thank everyone who prayed for me,” said Usyk, the former undisputed cruiserweight champion. “I dedicate this victory to my country, to my family, to my team … to all military members defending the country.”

In Saturday’s fight, Usyk was forced to survive perhaps the most adverse moment of his professional career. Joshua, who concentrated on the body attack all fight, finally broke through in Round 9, hurting Usyk with a bundle of shots.

The champion was on unsteady legs as Joshua bullied him around the ring and unloaded punches to the head and midsection. Joshua threw 67 punches in the ninth and connected on 28, double his fight high.

But before he could truly capitalize, Usyk turned the tables and responded with his best round of the fight. Now, it was Joshua who was reeling as Usyk unleashed power punches from all angles. A sharp Joshua counter right hand momentarily halted Usyk, but Usyk stormed back with more of the same.

“This is already history,” said Usyk, who like Joshua captured gold at the 2012 Olympics. “Many generations [are] going to watch this fight, especially the round where someone tried to beat me hard.”

Usyk closed strong with a dominant 11th round, when his movement befuddled the bigger Joshua, and a ferocious Round 12, when Joshua went for broke in an attempt to score the knockout.

“What a performance from Usyk,” said promoter Eddie Hearn of Matchroom Boxing. “In the ninth round I ran over and thought we had it. The 10th round was one of the best I’ve seen to turn a fight around. What he did in the 10th, 11th and 12th was incredible. And that was the difference tonight. … He’s just too good, and there’s no shame in it [for Joshua].”

Joshua, a 32-year-old from England, was attempting to become a three-time heavyweight champion. He was also looking to regain his three titles in a rematch in Saudi Arabia for a second time.

After he lost by TKO to Andy Ruiz Jr. in June 2019 — ESPN’s Upset of the Year — Joshua reclaimed the unified championship with a decision in the rematch six months later. But against Usyk this time around, Joshua wasn’t able to exact revenge.

Still, Joshua, who appeared on the verge of being stopped in Round 12 of the first meeting, performed much better and will surely move on to plenty of marquee fights, with or without a belt. He is ESPN’s No. 4-ranked heavyweight.

Usyk, meanwhile, has presented a puzzle that no opponent has come close to solving, whether it’s at cruiserweight or heavyweight. Despite conceding 24 pounds in weight to Joshua — and another three inches in height — Usyk’s excellent footwork, southpaw jab and boxing acumen ruled the day.

So far, Usyk has proved peerless in the ring, but if there’s one man who could be favored to beat him, it’s “The Gypsy King” in a battle for all the marbles.