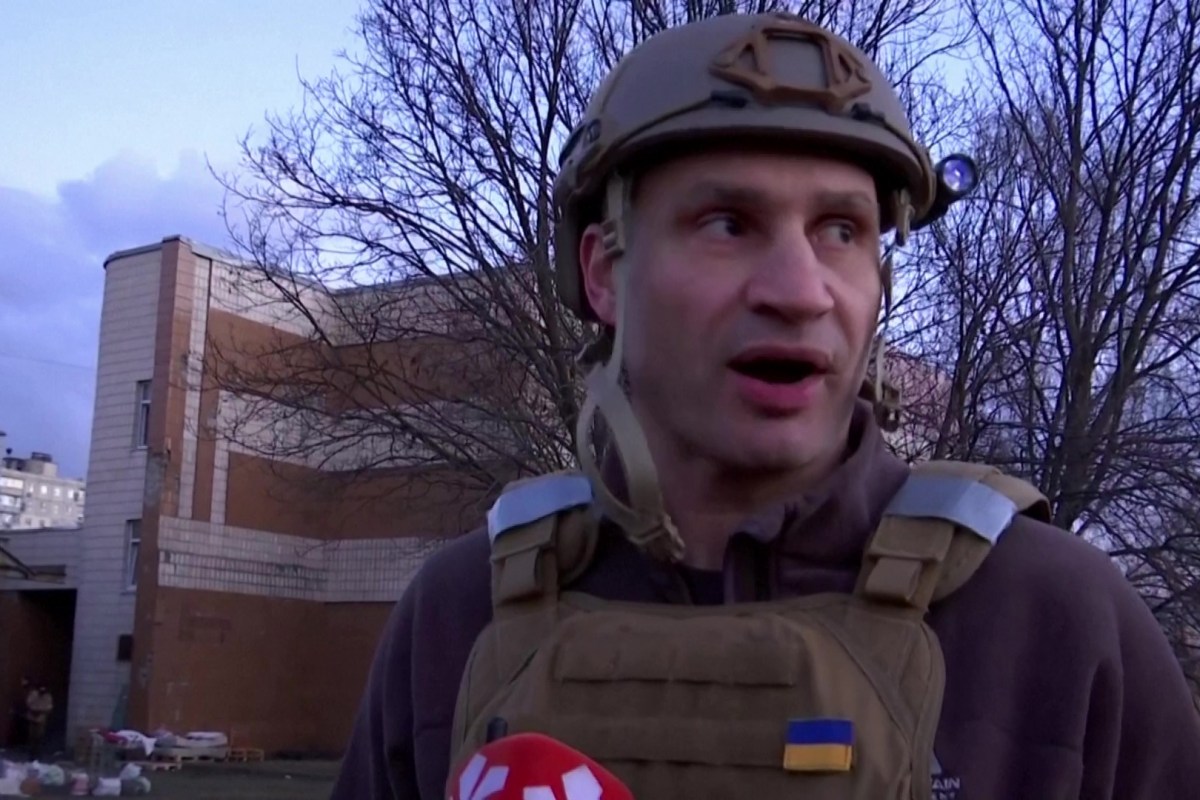 VITALI Klitschko has tonight denied Kyiv is “encircled” by the Russians – as he ordered Putin’s troops to “go home”.

As Russian troops inch closer to the Ukraine capital, the city’s mayor defiantly told the soldiers “there is nothing to find here in our home”.

Russian troops on a road in the Luhansk region, UkraineCredit: Reuters

Kyiv mayor in his office in the City Hall in Kyiv, UkraineCredit: AP

It comes after a day of heavy fighting during which the Russian troops failed to capture the capital.

Shells rained down across Ukraine following Putin’s invasion – as the battle for the capital, Kyiv, rumbled into a fourth day.

And Klitschko reportedly said Kyiv was now “encircled” – and he said there were no plans to evacuate civilians if the Russians manage to take the capital.

The mayor said: “We can’t do that, because all ways are blocked. Right now we are encircled.”

But he later denied making the comments.

Klitschko’s spokesperson said he misspoke, and the information was “a lie and a manipulation”, The Kyiv Independent reports.

In another interview, Klitschko said he was proud of the huge numbers of people stepping forward to fight the Russian invasion – and he hoped for a “quiet night”.

Speaking on Sunday night, the ex-boxing champ said: “We hope tonight will be quiet. We hope the Russians take the decision to move back to Russia.

“They have nothing to find here in our home.”

He said: “Everybody is proud of our army, our Ukrainian people, who defend our city, defend our homes, defend our families.

“We respect everyone who is ready to fight for our country.”

It comes as peace talks are due to be held between Ukraine and Russia – despite Vladimir Putin putting his nuclear forces on high alert.

Diplomats from Kyiv and Moscow are set to meet “without preconditions” near the Prypyat River on the Belarusian border.

Ukraine’s foreign minister Dmytro Kuleba said the talks were called following a conversation between Zelenskyy and Lukashenko after it was feared Belarus was preparing its troops to join Moscow’s invasion.

Putin earlier put his nuclear forces on high alert – just after warning the West “may face the greatest consequences in history”.

That raises the terrifying possibility the crisis and a miscalculation could spill over into nuclear war.

In an address on state TV, Putin claimed aggressive statements by NATO leaders and economic sanctions against Moscow have forced his hand.

He said “not only do Western countries take unfriendly measures” such as “illegal sanctions” but “top officials of leading NATO countries allow themselves to make aggressive statements with regards to our country”.

Putin said he has now ordered his military command to put Russia’s deterrence forces – a reference to units which include nuclear arms – on high alert.

The move has left the world scrambling to decipher what Putin’s move signifies.

Both Russia and the United States typically have land and submarine-based nuclear forces on alert and prepared for combat at all times.

But nuclear capable bombers and other aircraft are not.

A top EU official said the bloc will close its airspace to Russian airlines, fund arms supplies to Ukraine and ban pro-Kremlin media.

Meanwhile, Ukrainian forces are battling the Russian invaders on the streets of Kharkiv and remain in “full control”, local commanders say.

The Ukrainian government said it has killed 3,500 Russian soldiers while there have been 240 civilian deaths on its side.

As Putin’s forces encounter stiff resistance from Ukrainians defending their homeland, the Kremlin strongman must be “furious” about the lack of progress, a former Nato defence chief has said.

“Putin is furious, he thought that the whole war would be easy and everything would be done in 1-4 days,” tweeted Riho Terras, who is also the former commander of the Estonian armed forces.

He said Ukrainian intelligence believes the Russians don’t have a “tactical plan” to deal with an enemy that is fighting back.

“The Russians are in shock of the fierce resistance they have encountered,” Terras said.

Earlier terrified civilians were urged to take cover in subways and basements as darkness fell on Saturday night.

Residents were warned the burning depot was emitting smoke and poisonous fumes and were told to keep their windows shut and to take cover.

There were widespread fears that the Russian army would step up its efforts to seize Kyiv this weekend, targeting commercial businesses in a bid to destroy Ukrainians’ morale.

A city-wide curfew is being enforced in the capital while authorities hunt down “sabotage and reconnaissance groups,” Kyiv’s mayor said.

Ukrainian Territorial Defence fighters wait for an order in the city of KharkivCredit: EPA

Smoke billows over the town of Vasylkiv just outside Kyiv after overnight Russian strikesCredit: AFP